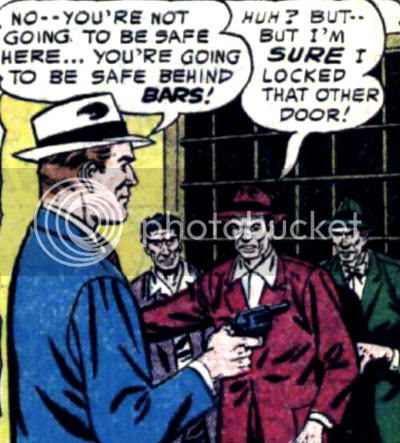 Det. Jones' first recorded assignment saw him track four crooks were hold up in a barred room. John Jones snuck in using "the simple Martian procedure of attuning the molecules of his body to those of a solid wall--and walking right through..." Although he captured three of the thugs right off the bat, Jones had a tougher time with Trigger Tom Taylor, but still brought in his man. 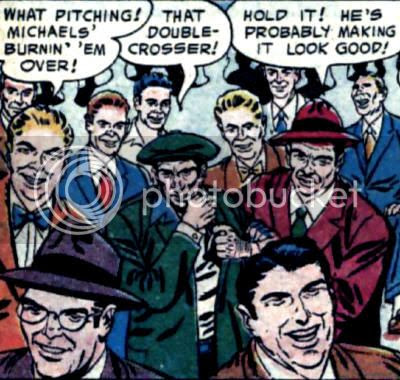 Returning to the precinct, Jones heard the story of "Big Bob Michaels" from his lieutenant. After serving a prison term, Big Bob went straight, pitching for the minor leagues. The major leagues were looking to scout him, but his shady past potentially haunting him could blow his chances. Clearly, a bygone era. Jones was asked to watch over Michaels, and soon learned through telepathy that Big Bob's former "pals" were blackmailing him. They wanted him to throw his first game with the Flamingos against the Wonders, or they would expose him to the press. J'onzz then used his powers of precognition for the first time... "I see the end of the game tomorrow! Michaels would win it one-to-nothing, with a home run in the ninth... If those crooks weren't molesting him." Wouldn't that mean J'onzz would see Michaels lose the game, since he pierced the veil of time after the harassment began? What is he in his spare time, a Watcher from the Marvel Universe? Jones wasn't content to simply ask what if... "He's going to need some help--so I think I'll be on hand at the game." 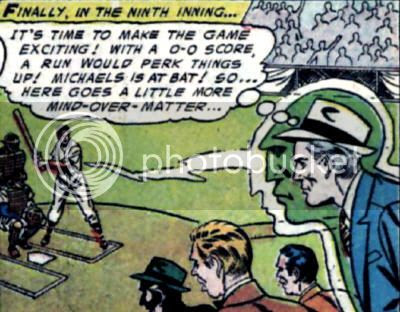 Like Jack Webb auditioning for the Michael Landon role in "Highway to Heaven", Jones busted out with divine intervention from an unusual source. "Now we'll see what happens when I use a little Martian molecular hypnosis..." A real slow ball, is what. "Let's see how the crowd reacts to this one... Martian mind-over-matter!" The way most folks react to a no-hitter, I'd guess. I wonder if Jones used a Martian booking agent on the side? "It's time to make the game exciting! With a 0-0 score, a run would perk things up! Michaels is at bat! So... here goes a little more mind-over-matter..." Enough with the damned Martian ringer already! Even after Michaels sent the ball straight to the catcher, Jones covered his butt! Was this guy kissing up to his lieutenant, or what? No wonder he made detective so fast!

An invisible Jones eventually set up the three mobsters who had plans to punish Big Bob for his unearned game. The detective arrested "the Devon mob," collected compliments from his commanding officer... and just maybe even collected his winnings from a bookie off-panel?

"The Case of the Magic Baseball" was written by Joe Samachson and drawn by Joe Certa.
Posted by Diabolu Frank at 2:45 AM