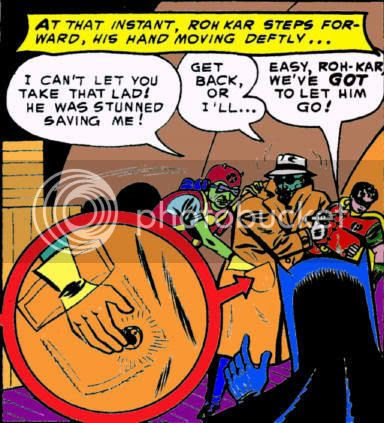 "The most formidable criminal ever to strike at Gotham City was known only by a name of mystery..."

Who robbed the Gotham Gun Company? Who vanished with both loot and a new machine-pistol model from within a sealed vault? Who appeared from inside a locked armored car to make off with powerful new tommy-guns? Who can scale a sixty foot wall like a human fly? "That incredible new bandit---THE STRANGER!" The Caped Crusader surmised, "From all indications, this Stranger is some thwarted scientific genius, using his knowledge for crime! Nothing else could explain the incredible things he's done!" Or could it?

Using sophisticated technology within the Batplane while flying over the woods from which the Stranger first appeared, Batman and Robin uncovered a small spacecraft! While examining its unearthly metal exterior, a second starship set down in the woods! Suspecting this may be an accomplice to the Stranger, the Dynamic Duo tackled the figure that emerged, and he wasn't human! Their weird prisoner defended himself with words in their native tongue! "Yes, Batman... we Martians are quite familiar with your great career! ...We've kept our scientific civilization secret from Earth inhabitants, because we want to keep our peaceful world unchanged! Only to pursue a dangerous Martian criminal have I, Roh Kar, first Lawman of Mars, come to Earth!"

From their televisioscopes the Martians could view the lives of Earthlings-- the Dark Knight Detective's being a feature attraction. However, the Lawman of Mars' fellows consoled, "You too are great, Roh Kar, but there is so little crime on Mars, you have small chance to prove it!" That changed when the distorted genius Quork took advantage of the situation, embarking on "a career of evil." Roh Kar pursued Quork as he stole an invisibility belt, jet pack, and finally an experimental space ship. Unable to follow Quork to Earth, Roh Kar had to wait until a second craft could be built, allowing Quork time to become the Stranger. The Dynamic Duo and the Manhunter from Mars decided to team-up, although Roh Kar had to take care on this other world. "The rich oxygen of Earth's atmosphere makes me dizzy, after the thin air of desert Mars." Batman helped Roh learn a breathing technique to compensate.

The Stranger proved easy to find, thanks to the Martian technological marvel, the human compass. "You see, every human brain radiates a faint electric wave--- never the same in different people! This compass is tuned to Quork's wave, and is now pointing directly toward him!" The trio were led to Science Hall, where the Stranger continued his crime spree, clocked Robin on the noggin, and smashed the human compass. "Hold it! So you came after me to Earth, eh, Roh Kar? Well, neither of you move, or this Earth brat will die! I'm going out of here with him! ...Ha, ha... this is a real triumph, defeating both the Lawman of Mars and Batman of Earth together!"

Roh Kar managed to slip a tracking device onto Quork's person, so that he and Batman could give chase from a safe distance via jetpack. At the end of their search, they found Robin strapped to a giant missile, while the Stranger prepared for his return to Mars with his newly acquired arsenal. "So that is your plan! It's diabolical, to take weapons to peaceful Mars!" What the Stranger didn't know was that Batman had flooded the hanger with pure oxygen, making Quork "slaphappy." Though pacified by oxygen intoxication, Quork taunted, "No---you haven't won! Hear that roar? I also had a time-fuse set to detonate that missile outside, after I was gone---and it's going up now, with your young friend!" Batman saved his young ward via jet pack, while Roh Kar declared "We're going back to Mars, criminal! You'll never escape the moon prison there!" The Lawman of Mars took all evidence of this adventure home with him, so the Dynamic Duo didn't even try to explain all the alien daring-do to Commissioner Gordon, only assuring him the threat of the Stranger was no more.

Roh Kar is typically dismissed as irrelevant by comic historians, but one look at his sole appearance muddies the question of who exactly created the Manhunter from Mars even further than previously thought. The story wasn't cover featured, so it's altogether possible that writer Edmond Hamilton conceived the basic premise himself, though the probability of editorial suggestion remains high. Regardless, the tale establishes the mostly pacifistic notion of Mars, steeped in science fantasy and a fascination with humanity. Though technologically enabled, Martian powers of flight and invisibility are on display. Nearly all Martians are shown wearing variations on the X-shaped chest straps, short pants, and cavalier boots upon their green-skinned forms. However, a second "X" design, made from four separated black pie slices, is a recurring image here (as opposed to the eight integrated white divisions on J'onn J'onzz's belt.) Deviations from the familiar Silver Age DC Martians include large pointed ears, emaciated frames, mildly Satanic short antennae, and the occasional scales. These visuals were credited to Lew Schwartz, inked by Charlie Paris.

In the internet age, I've often seen Roh Kar dubbed the "Golden Age Manhunter from Mars." This is untrue for two key reasons. The most obvious is that few consider DC Comics from 1953 as part of the Golden Age, which is usually considered to have ended within a few years of World War II's resolution. The second is that Roh Kar is only referred to as the "Lawman of Mars" in a story titled "The Manhunter From Mars," except when both he and Batman are twice dubbed a pair of "manhunters." While the story title is clearly alluding to Roh Kar, he doesn't bear the actual title of a "Manhunter." That was reserved for another guy, two years later...
Posted by Diabolu Frank at 1:29 AM

Flooding the hanger with pure oxygen was a pretty clever twist. It's sort of funny that in this day and age of more adult-oriented superhero comics, you rarely get to see the heroes using their brains.

Have you got any images of the Martians from this issue?

I pulled the art out of the Showcase Martian Manhunter collection. I've done this before and will do so again and again. Usually, I up the contrast to whiten the page and enrich the inks, the do very basic coloring. I didn't in this case, and instead kept the crumby brown newssprint, because I had no reference for recoloring the page when it came to figures like Roh Kar and the Stranger. Same problem with the other Martians.

If you'd like to see B&W scans, either of the quality of the posted page or of the digital contrast variety, I can do that. Just let me know which, where, and in what format.

Interestingly, Roh'Kar was the first of the "other" green Martians from the Manhunter's last miniseries. Although, by that time he had become a White Martian hypnotized into believing he was a Green Martian. I think.

Luke, I was aware of that, and yet, no interest whatsoever. I think three years of hatred directed at the Ostrander series burned out that specific impulse in my brain. I will eventually read and ridicule the Lieberman reboot abortion, but since I backtracked away from that period to the year 2000, I've got many moons until wasting my money on the trade. With any luck, I'll catch it at some massive discount on resale, so that the purchase is never registered anywhere important.

I got it from Adama for free, so disgusted with it he was. I thought it was diverting enough, but I didn't pay $24 for it -- I only paid the buck for Brave New World. That probably would have soured me a bit (along with reading it over 8 months and not a week). The fact that I cannot remember whether Roh'kar was a Green or White Martian only solidified what an impact it made on me.

I bought MM#1 as well as BNW, but got both at such a sharp discount, I'm only in for about $1.25 (shipping not included.)

Where can I find a reprint of the Batman #78 story with Roh'Kar?
I make custom Mego figures as a hobby and I am looking for reference materials without having to buy a Golden-Age comic. The story is not listed in the Showcase Presents collection.

gman, as far as I can tell, the story has only been printed twice: the original color Batman #78, and the black & white Showcase Presents:Martian Manhunter Vol. 1 TPB. I've never seen a color copy, so I'm at a loss as to how one might paint Roh Kar...