GODS AND MONSTERS
“I’m so sorry... But your appearance gave me quite a scare. My heart... I fear the strain was too much... There isn’t much time. I’m not even sure if you understand me. My experiment was intended to send and hopefully receive a radio signal from deep space... How it brought you here to me is a mystery. I-- uunnh... My time is almost up... There is so much you need to know. You must be very careful. This world isn’t ready for... you. Mankind is a suspicious, violent creature. You must not reveal yourself. I’m... I’m sorry. Whoever you are... please... forgive me.” 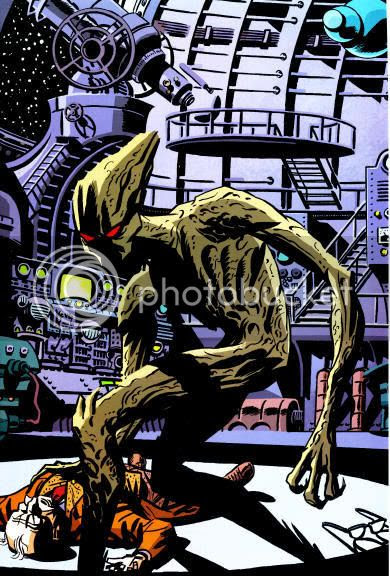 GOTHAM CITY – 1955
My telepathic abilities and a thorough examination of Dr. Erdel’s device led to the conclusion that I cannot return to my Martian homeworld. My immediate concerns turned to survival and concealment. Compared to these “human” beings, my Martian form was extremely powerful. Invisibility, flight, and telepathy were advantages I had over these creatures, and in this knowledge I was secure I would be able to survive. As a shape-shifter, I was able to assume the likeness of Dr. Erdel to venture into this strange world. He had enough currency on his person for me to secure lodgings in this Gotham City. The only threat this new world afforded me was elemental. Fire. The very sight of it fills my Martian soul with dread. For now I am safe, but if I choose to try to live here, I will need to know more about this curious planet.

My immediate needs for food and shelter had held back the heavy tide of grief and loss that now surrounds me. My memories of my home planet are vague and distorted. I can only wonder if Erdel’s device has damaged that part of my consciousness. Particles of recognition in the form of sense memories fuel my sense of dislocation. To lift this confused darkness, I resolve to focus on the new life I am confronted with. For several weeks now, I have studied life on Earth with the help of this charming device they call television. It is giving me all the information I need to act like a typical citizen of this nation called America. So many types of people... animals... and the foods! Delicious, sweet and savory foods unlike anything on Mars. I ingest the news programs, current affairs and the popular game shows. Even brilliant achievements in art that feature fantastic creatures called “cartoons.”

Two things become clear to me. The first is that this is a world where good and evil struggle in all levels of existence. I want to be a force for good. The second thing is that I need to find employment if I want to obtain any more currency. As I’m sure is the case for many Earthlings, I find my answer on the television. My Martian name is J’Onn J’Onzz. Here on Earth I shall be known as John Jones. Police Detective John Jones. I’ll be one of the good guys.

-By Darwyn Cooke. “This type of story usually has an overarching narrative by a single character that helps hold the story together. The photographer in MARVELS, the priest in KINGDOM COME and Johnny Quick in THE GOLDEN AGE are some examples that spring to mind.

I decided it might be more interesting (and for some readers, frustrating) to let the story emerge slowly, and to look at our cast’s disparate lives in a series of blackout scenes that were provocative stories on their own. It isn’t until these stories start to gain momentum and overlap that the narrative intent becomes clear... now we land on J’ONN J’ONZZ, THE MANHUNTER FROM MARS... For the series, it was taken for granted the reader knew J’ONN’s and BARRY’S origins. In order to make this [Absolute] edition “complete,” this page [86] and page 90 were added to fill out their backstory...

The notion of J’ONN mistaking television for an accurate portrayal of life in America really grabbed me... J’onn as GROUCHO MARX... BUGS BUNNY...NATIVE AMERICAN...”