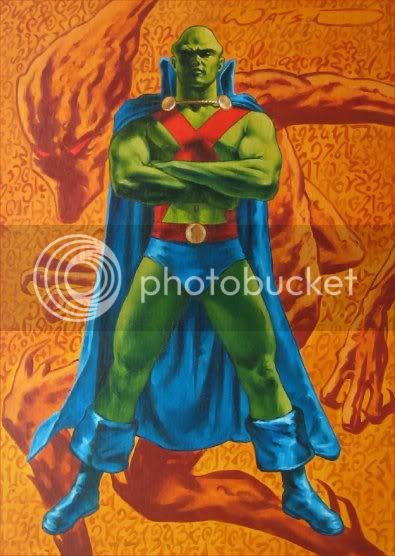 I'm playing catch-up on my blog and others' since my computer went down over the weekend. Rob at The Aquaman Shrine posted a neat image of the Sea King fighting the Ocean Master by John Watson, and one inspired Google search later, I found the above Martian Manhunter piece. This was for the Upper Deck VS collectible card game, and features a nice homage to Darwyn Cooke's natural form Martian splash page from the previous year's DC: The New Frontier #2 (2004) Here's what Watson had to say:

I opted for a basic design as cards are small and often the images on them don't stand out.

For more, visit The Watson Website!
Posted by Diabolu Frank at 8:00 PM

I loved Watson's Hawkman covers back during the Johns/Morales run.