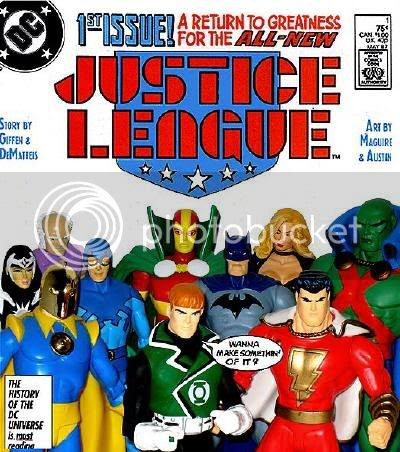 Everyone should be familiar with Kevin Maguire's iconic and oft-imitated cover to Justice League #1 (May, 1987). I love the piece, and it has already popped up several times on this blog, as when I criticized the approach of The Revisionist JLI by modern writers who seem to think the only essential members of the team were Blue Beetle, Booster Gold, Fire and Ice. More recently came the 1988 Justice League International Postcards: JLI Group Shot, a post which prompted reader and fellow blogger The Irredeemable Shag of "Once Upon A Geek" to offer up this recreation using DC Direct action figures. I think he did an awesome job, and the only anachronistic element improves the image: replacing Black Canary's awful period costume with her classic original. DC Direct has also done swell work with these figures (I especially like the Ed McGuinness inspired Captain Marvel.) Click here to enlarge and view the original article.
Posted by Diabolu Frank at 9:00 PM

Funny you should mention Black Canary. I just got the JLI version of Black Canary within the past couple months. I've been thinking about reshooting this image with the new Black Canary figure (and the Doctor Fate from "New Frontier").

And thanks for the shout-out and the link!

This is really snazzy!

This is really snazzy!