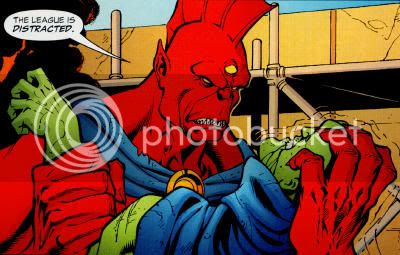 Despero used his mind-controlling third eye to force Manhunter into his natural Martian form, then drew blood when he raked J’Onn’s chest with his claws. J’Onzz knew he was outmatched, and fled the Watchtower under his own power. As I long suspected, Despero too possessed some degree of flight, and trailed the Manhunter to terra firma.

Manhunter was aflame from the friction of reentry, plaintively casting out telepathically, “Are you there...? Can you hear me? I need assistance. He is coming.” J’Onzz struck ground in San Diego with terrific impact. Despero palmed the back of J’Onn’s head and lifted him off the ground. “Why cry for help when you know I’m the only one who can hear you? Even if I weren’t dampening your telepathy, there is no one to answer the call. The League is distracted. Too busy betraying one another and protecting their own to worry about the likes of you.” Despero dug his talons into the flesh of J’Onn’s face, then locked J’Onn’s arm within the vice grip of his other hand. “Face it J’Onn... there is no one left to save you. In response, a metal rod from a construction yard speared Despero’s right shoulder. Aquaman claimed, "That’s funny Despero... I was about to say the same to you."

Despero rent Aquaman’s flesh, but the Sea King hurled him through the bow of a boat into the bay, commanding “Make. Him. Bleed.” Despero was beset by sharks, their visage and ferocity a seeming match for his own. In his element, Aquaman went for Despero’s throat, and slammed the fiend into the midst of Sub Diego. Aquaman remained focused, despite mental communication with the extant Martian Manhunter.
“Arthur.”
“J’Onn... Where’s the rest of the League?”
“Out of range. I was barely able to contact you. Remember... Despero is a telepath. If he can’t subdue you physically... he will do everything in his power to take over your mind.”
“Let him try.”

As Despero’s third eye energy blast scythed the water, Aquaman pulled his fist back for a blow that sent the destroyer back up to the surface.

The Sea King rejoined the Manhunter. “You all right?”
“I will be, once we’ve disabled Despero.”
“Just tell me how.”
“We have to shut his mind down. That’s why I came to find you. Together, our combined psionic abilities might be enough to overpower him.”
The Destroyer of Worlds challenged, “Let’s find out, shall we?”
Our pair of heroes launched their stratagem, while the Leaguers who had been “distracted” by the Secret Society of Super-Villains returned home to find the Watchtower wrecked.

J’Onn J’Onzz had seen a lot of combat in the panel gutters, which might explain why, when he and Arthur next appeared in the Batcave, they were in thrall to Despero. “I have my king... I have my rook... and now... I have my knight. Let the game begin.”

Catwoman’s claws revealed a “third eye” beneath the cowl of the suddenly adversarial Caped Crusader. “Batman is under my influence. Just like the others. Their conflicting emotions have left their minds fractured and vulnerable. Like yours, Selina Kyle. You’re fighting on the wrong side.”

“Gee, a chance to team up with an alien dictator? As tempting as that sounds-- I think I’ll pass.”
Selina managed to signal the League via the Batcomputer. Meanwhile, “I’m going to have Batman do things to you... that he never knew he was capable of. “

With all the "Aquaman is lame" jokes, its nice to see him really hold his own here.

Absolutely! I'm fond of the character, and appreciate the rare respect.