Saturnian Salutations, or how Jemm spends his Summer 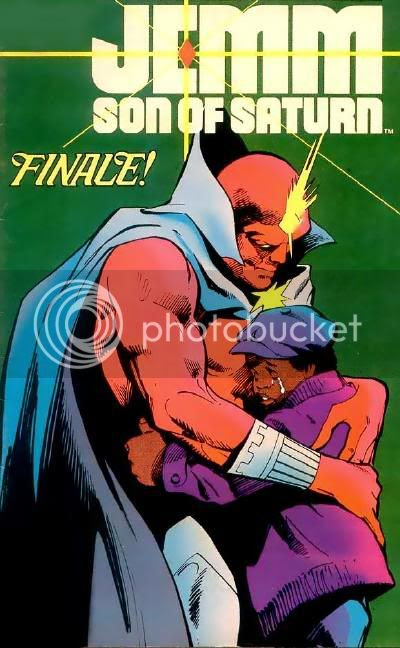 The March of Mongul was our month long look at a villain that really should have beat up on the Martian Manhunter more, and vice versa. In such a concentrated space and after having recently dealt with other theme weeks, Mongul quickly became a chore to write about. I also knew it was about time to start doing write-ups on Jemm: Son of Saturn, who has been associated with the star of this blog since his creation, especially seeing as the two heroes have already been interacting in synopses I'd written for DC Challenge and Crisis on Infinite Earths. However, Jemm had a twelve issue mini-series to work with, plus more appearances in DC Challenge, JLA, and the ongoing Martian Manhunter series. Packing Jemm into a month would have killed me, but it occurred to me a weekly write-up on Jemm's series could spread out nicely over three months, with additional material offered up when available. Hence, the Summer of Saturn has been awarded to the most popular option in our May poll, Which Obscure Supporting Characters do you want to read more about on this blog? I figure 40% of responding readership is a pretty clear mandate, and I retain the ability to write about J'Onn J'Onzz for the other six days of the week, since "Saturnday" will be Jemm's for a while.

So who is Jemm and why should a Martian Manhunter fan care about him? That goes back to December of 1982, when Greg Potter expressed interest to his old editor Paul Levitz about returning to freelance writing for DC. Levitz had Potter meet with DC's Executive Editor Dick Giordano, who sent Potter home with an edict: "Create a new super-hero character. Plot the first story of that character. If what we see is good... well, we'll see." Potter mulled over ideas for a few days, determining that he wanted to tell a story steeped in human emotion that spoke of contemporary times, and offered a hero different from all others in the then-present market. Combining influences that included E.T., Star Wars, and Frank Miller's Daredevil, Potter came up with Jemm. Potter also decided to set his story in winter time, that his aliens wouldn't conveniently speak English, and "let's have some real, honest-to-God black people in the strip."

Jemm was initially going to be something of an update of the John Jones, the Manhunter from Mars strip, as the original had been in publishing limbo for years. "J'Em" was to be the green-skinned cousin of J'onn J'onzz, and fled from Mars II to J'onzz's old stomping grounds after a Pale Martian coup. While J'Em lived in exile, J'onn would have a supporting role in the book, dealing with the situation on Mars II and interacting with one of his old comrades in due course. However, after three issues if "J'Em" had been written and one drawn by artist Gene Colan, the editor of Justice League of America informed the creative team that his book had its own plans. The Martian Manhunter would be returning as a member of the League after sixteen years away, in a storyline setting him against his own people in a Martian invasion of Earth. That being the case, J'Em from Mars became Jemm, Son of Saturn. After that snafu, a planned appearance by Superman was rewritten as "The Patriot," just in case it was decided that Jemm's series would no longer take place in the mainstream DC universe.

Jemm did officially joined the DCU, though you could hardly tell, since his appearances dried up swiftly after the close of his maxi-series. As far as I know, Jemm didn't make a single notable appearance from 1989-1997, when Grant Morrison was casting about for a villain to serve as Martian Manhunter's counterpart in the Injustice Gang. Whether Morrison remembered "J'Em," or just noted his vestigial Martian brow, Morrison decided to use the Son of Saturn as an unwilling antagonist. Ironically, a book that may have contributed to Jemm's obscurity had rescued him from it.

A couple of years later, when an ongoing Martian Manhunter series was commissioned to cash in on JLA's popularity, creators John Ostrander and Tom Mandrake wrote Jemm into its first major story arc. Further, the Red and White Saturnians were revealed to have been created by ancient Martians, and the Manhunter was drawn into their politics in a second major story arc in his own book.

As you can see, Jemm and J'onn were made to play together, and so the Son of Saturn will be appearing here regularly for the next few months as we elaborate further. I hope everyone welcomes him warmly.

For those curious, "Saturnian Salutations" was the name of Jemm's letter column back in 1984, and the primary source for information of this post.
Posted by Diabolu Frank at 9:00 PM

I intend for the Jemm issue synopsizes to run on Saturndays, but the 1st of the month landed on Moonday, so I made the Summer of Saturn announcement then.