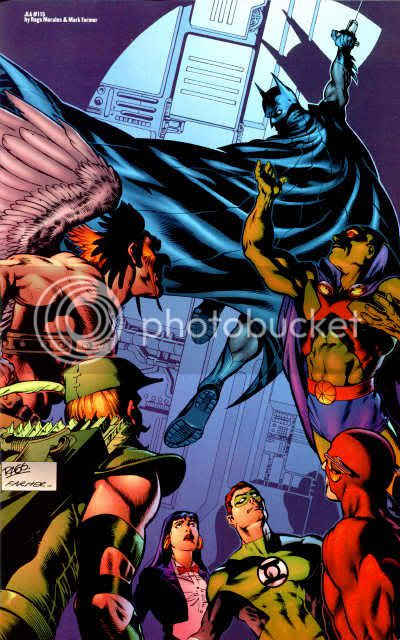 A long time ago, my family--my entire race--was wiped out by a psychokinetic plague. I keep coming back here--searching for some trace, some remnant of my past.”

J’Onn J’Onzz stopped walking the barren red wasteland, knelt down, and scooped up a handful of sand. Rising to his feet, he allowed the granules to slip through his fingers. “But Mars doesn’t feel like home anymore. My home is somewhere else now.”

At the JLA Watchtower, Hawkman and Green Arrow were ready to come to blows. Since the death of Sue Dibney, an increasing number of people were learning of abuses carried out by the Satellite Era league, specifically as it stood from the induction of the sorceress Zatanna until that of the young and naive Firestorm. When a villain knew too much, crossed a certain line, this group would vote on performing magical alterations of personality, or worse, virtual lobotomies and forced comas. Catwoman and Flash villain the Top became “heroes” for a time due to this process. Dr. Light, on the other hand, was turned from a brilliant threat to a bungling idiot. Now, this fact had come back to Light, and by extension members of the now more far reaching Society of evil-doers. Other heroes, like the third generation Flash and Green Lantern, were also becoming accomplices after the fact as they learned the truth about their forebears. The Batman had discovered the conspiracy as it was performed on Dr. Light, and he too fell victim to a “mindwipe” of his knowledge. Wally West, after much consideration, could no longer accept that. He called most of those complicit in this string of human rights violations, and declared “...if you’re not going to tell Batman... I am.”

From the doorway of the meeting room, a Martian queried “Tell Batman what?” Hawkman tersely replied, “Nothing.” Too late, as the Manhunter suspected, “It doesn’t sound like nothing.” Flash relented, “Read our minds, J’Onn. You tell us.” His eyes pinpricks through the shadow cast by his brow, J’Onzz paused, then grimaced. “I can’t. Why?”

From out of nowhere, Hal Jordan’s voice answered, “Magic.” This Green Lantern hadn’t been a member of the Justice League since the Parallax entity had possessed him, launching him on a mass killing spree. At one point, Jordan as Parallax nearly allowed entropy to destroy the known universe as part of his plan to “fix” everything. Now free from the parasite’s influence, Green Lantern had not only returned to his original position against the mindwipes, but reconsidered his part in the conspiracy to keep the practice secret regardless.

For those keeping score, the original vote had Green Arrow, Green Lantern, and Black Canary against; Zatanna, Hawkman, and the Atom for; with Flash Barry Allen breaking the tie in favor. Elongated Man abstained to care for his wife, while latecomer Batman clearly objected with batarang in hand. Retroactive continuity clouds matters a bit, as Wonder Woman would have been involved as a member at the time, but her 1987 “reboot” had the character arrive in “Man’s World” well after the stories took place. Further, in actual publishing history, J’Onn J’Onzz had quit the League (and pretty much all comics appearances) nearly a hundred issues before these events took place, but had “always” been a member Post-Crisis. How to handle the inconsistency? Bless their hearts, Zatanna’s magic kept the Manhunter in the dark and far from blame. She was an established member alongside J’Onn right through to the end of that series. J’Onzz rarely had contact with conspiracy Leaguers for another decade, and the reformed “JLA” consisted of newer or mostly unrelated teammates. High five for all the fans of characters kept clear of this moral boondoggle!

Back to the story, an increasingly agitated Manhunter demanded, “What did you have to do?” Hal told J’Onn everything, including the mass mindwipe of a whole incarnation of the Secret Society of Super-Villains who had discovered the heroes’ secret identities. Zatanna, head hung low, confessed, “But it didn’t end there. Batman tried to stop us...”
“So you did it to him, too. And to me?”
“We knew you’d never read our minds without our consent--“
Hawkman interrupted, “But we couldn’t risk your picking up the stray thoughts of some of our weaker minds...”
“So you hid the memories from me.”
“I didn’t want to disappoint you.”
“And we didn’t want you undoing what we did.”
“I would never alter another person’s mind. There is no greater violation--“
Hawkman offered justification without apology, while Flash noted Batman’s increasing alienation. “We have to tell him before--“
Manhunter grimly asserted, “He knows.”
Canary found her voice to ask, “J’Onn, what are you going to do?”
“Fix it.”