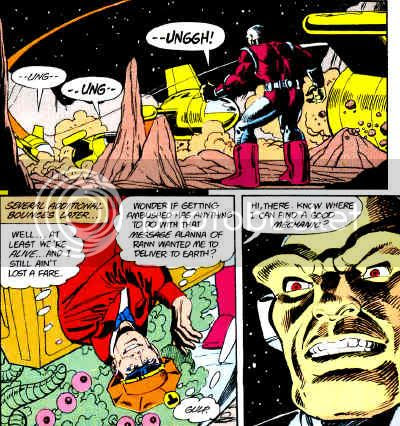 Note: In the absence of Martian Manhunter-related material in DC Challenge #7, it was not covered on this blog. You can read the full length synopsis here, or a streamlined version highlighting Detroit-Era JLA members here.

Finally, after eight issues, Batman said plain exactly what the heck had been going on. "Earth and the planet Rann are under attack by mystical forces... demons inhabiting long-dead human beings, and creatures risen out of ancient mythology. At the same time, Earth is being invaded by aliens from some cosmic organization called the Greater Galaxies... I found three 8-figure numbers scrawled on a wall at a power plant... I ran these numbers through my computer here in the Batcave... and got a result that seemed to spell a formula to bring about the end of the world. The numbers, decoded, are electro-magnetic vibrational frequencies... [if] put into operation... the resulting wave-front could crack the Earth like an eggshell." The Dark Knight Detective knew demons were involved, and headed in his Batplane for their nearest concentration point, Metropolis...

Unbeknownst to the Dark Knight, his nemesis the Joker had helped orchestrate attacks on Earth's heroes with the Greater Galaxies organization. The Clown Prince of Crime worked under the turbaned alien Kaz with the promise of kingship over Earth. Kaz explained the situation as follows:

"Project X involves the disruption of physical reality... the merging of this reality-plane with that of the netherworld. Bork and his fellow renegades of the Black Council have discovered a weakening of the cosmic fabric here in this locus... on the world you call Earth. A similar, parallel weakening is taking place on the planet Rann, of the star-system Alpha Centauri.

Bork has developed a device known as the Probability Disruptor, which feeds on red sun radiation, relayed to this world from a base on Earth's satellite, Luna. The Disruptor is destroying the protective barrier between realities at this locus. The result is an increase in the manifestation of demons on Earth... manifestations that occur normally at this locus, at periodic intervals related to phases of the moon. Bork's disruptor, however, has increased the number of manifestations a thousandfold.

Project X is upsetting the natural cosmic balance... a balance we of Molanto have worked long and hard to maintain. To save reality, Molanto, in conjunction with the Greater Galaxies organization, have invaded Earth. We have done this for the simple reason of expedience. Bork must be found. Project X must be halted. The fastest, simplest way to accomplish this is through the conquest of Earth."

Earth's super-heroes were likely to interfere, so Kaz engaged the Joker to assist in distracting them. The Joker stated, "Capturing all the heroes who'd been born off world, like Superman and J'onn J'onzz, among others-- and threatening to execute them as traitors to the Greater Galaxies-- that was my lovely idea. See, it's what we call a red herring. Now all the other heroes will be wondering what the alien heroes have to do with the alien invaders. It'll drive 'em nuts, giving us time to strike! Which brings me, oddly enough, to my final plan... I need three million tons of rubber cement, Kaz..." The Joker wanted to gum up the works in Washington. D.C., but Kaz was done with this insanity, and had the Joker locked away.

Meanwhile, Space Cabby and his passenger had made their way to Earth's moon with a message from Alanna and Sardath of Rann. The cab was struck by an energy blast, and skipped roughly across the lunar surface. Mongul then lifted the downed space cab over his head and demanded, "You will explain who sent you, human, and how you discovered the rebuilt relay station. Answer quickly... or you risk the wrath of Mongul, Master of Worlds!"

The narrator noted that without air to carry sound, it was understandable Mongul wouldn't hear a Boom Tube opening behind him. Mongul shouted, "Lies, lies! You say you come from Rann with a message for Earth-- do you take Mongul for a fool?" From behind, Metron argued, "Only a fool would disbelieve an obvious truth, Mongul. Ergo, you are a fool." The merciless former monarch asked, "Who are you?" His reply came in two forms; physically being knocked over the side of a ledge, and verbally: "I am Lightray of the New Gods, Mongul. Hello... good-bye!" A third member of the New Genesian party, Orion, caught the falling space cab with the aid of his astro-harness. Metron noted that his calculations had led the heroes to this relay station, which functioned similarly to a boom tube and allowed New Gods passage through the disrupted Plane of Holes. The group had arrived too late, however, as Earth was doomed to be shaken apart by the already broadcast destruction frequency.

"If This Is Love, Why Do My Teeth Hurt" was by Gerry Conway, Rick Hoberg, Dick Giordano and Arnie Starr. This synopsis has been edited for Martian Manhunter fans. The unabridged version is available here.