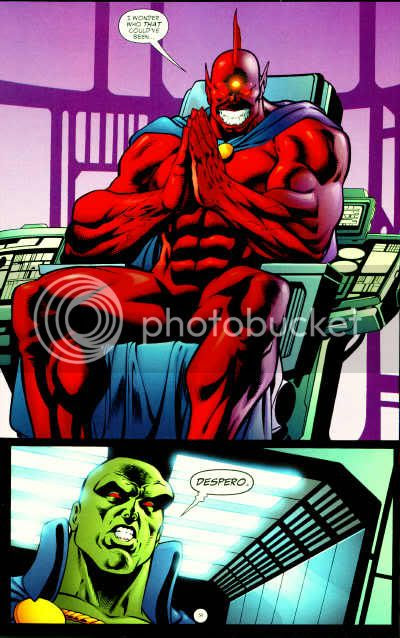 Terrebonne Parish, Louisiana.
Belle Reve Prison.
Frenchwoman Deborah Camille Darnell has lain here in a coma since her short stint as Star Sapphire ended with the Secret Society’s mindwipes. Red eyes appeared in the darkness of her room, a blue-caped figure commanding her, “Wake up.” Her costume and consciousness psychically restored, the villainess had her own demand. “You!?! Tell me! Who did this to us?”

Opal City, Maryland. Ralph Dibney was pulled from his home before it collapsed in on him.

Gotham City. An invisible Martian inadvertently comes between Batman and a flirtatious Catwoman, in the literal sense. After apologizing, J’Onn explained, “We need to talk.”

Bodies of Justice League members that had arrived on scene to the aforementioned hot spots fell limply from the sky to the trio’s feet. Sapphire, Felix Fault, the Wizard, the Floronic Man, Chronos, and Matter Master had arrived to continue their reunion tour, with a vengeance! Batman shielded a Manhunter set on telepathically reviving his fellows while Catwoman wielded a convenient flamethrower against the Secret Society of Super-Villains. J’Onzz accomplished his task, but between Zatanna’s revelations and attacks from the Society’s warlocks against him and his, the Manhunter proclaimed, “There will be no more magic today,” eyes ablaze. “One last trick,” Felix Faust assured. “Now you see us... now you don’t.” The Society vanished without even a psychic trace. Green Arrow bemoaned the effect of even more magic there, but Manhunter wasn’t so sure.

Batman took off for the Batcave with an injured Catwoman, and was none too pleased when he was followed by a Martian and League set on making things right for the betrayal against the Darknight Detective. Batman was unforgiving, going so far as to slug Hawkman for attempting to vindicate their actions. Clearly failing here, the Leaguers suddenly remembered the threat posed by a team of superhuman criminals who knew their secret identities. “You should all go home to your loved ones. We’ll regroup later at the----Watchtower.” Manhunter’s voice had trailed off, aware of the horror of Red Tornado lying in pieces before him.

Returning to the moon, Manhunter found a terrible, corrupting presence waiting in the Monitor Womb. “J’Onn. I’m so glad you’re here. Someone has given the Secret Society their memories back. I wonder who that could’ve been...”
“DESPERO.”

“I know what you’re thinking. How could the Justice League----the people trusted more than anyone in the world----how could they have altered someone’s mind? Even I’m disappointed. After all these years of trying to destroy the League... the League will end up destroying itself. And this time, you won’t be around to fix it.”

“...You violated my mind the same way Zatanna did Dr. Light’s.”

“I didn’t alter your mind. I allowed you to see what you wanted to see.”

“No need to be defensive, J’Onn... Don’t bother trying to get inside my head. Or contacting the League telepathically. I’m ready for you this time, J’Onn. And I’ve made sure your friends are otherwise engaged. So, now... it’s just you and me.”

Despero: Too Nasty For Pants.

Why do you think he's always so angry? No need for pants! Poor bastard.