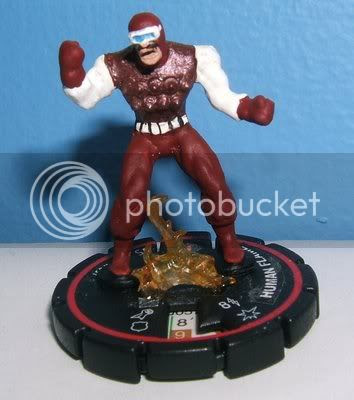 Over a year ago, we took a look at The Absorbascon blog, and more specifically, its author Scipio's many posts related to the Martian Manhunter. Scipio has been all over Showcase Presents: Martian Manhunter Vol. 2, collecting the last solo stories of the Silver Age, since its release in May. Based on the sheer quantity of material relating to the Alien Atlas since our last visit, I figured it was about time for another link post here at the Idol-Head to direct ya'll.

Do NOT read Showcase Presents Martian Manhunter Vol. 2!
Vol. 2, and remember, you were warned!

Compassion is a human emotion, referencing House of Mystery #161.

Zook Gets No Love, which is true. The stinkin' Human Flame, who appeared in only one story for nearly fifty years, has a Wikipedia page. Zook, co-star of dozens on Silver Age tales, does not.

The Human Flame has a Mike Miller LE custom Heroclix figure. Zook does not. Instead, we have just Haikuesday with Zook.

The Story of the Human Flame, an hilarious, multi-part over-analysis of Detective Comics #274. This is so great, I've refused to do my own write-up to date.

The Villainous Tarot, a collection of a character's villains who assume specific roles that help secure the hero's place in the comic book pantheon. Basically, the opposite of Scipio's Theory of Dynastic Centerpiece. I drafted my own Tarot here, as well as a Martian Manhunter Dynasty.

Martian Manhunter Demostrates Some Heroclix Powers for You

Where in the World is the Martian Manhunter? Scipio had his conclusions about the location of J'onn's Silver Age base of operations, while I had mine.

The Martian Manhunter is a Skrull.

Harvey "Two-Face" Dent argues both sides in the trial for the life of the Martian Manhunter:
The Case for Mr. Jones
The Case Against Mr. Jones

Meteorology in Apex City, a.k.a. Middletown, which suffered from a terrific amount of phenomena in the 1950s. Continued in Weather for J'onn's Funeral Services.
Posted by Diabolu Frank at 8:45 PM