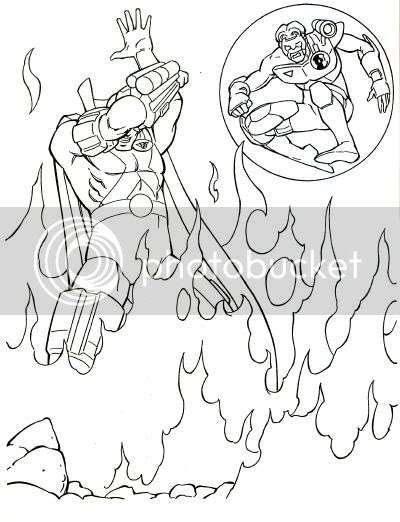 Okay, so Martian Manhunter was the first hero with a stand-alone pin-up*, appearing on the fourth page of this coloring book. That's great, except the above image appears eleven pages later, after other heroes were involved in another pseudo-story involving Darkseid and Despero. Does this mean the book is ordered out of sequence, and the rookie Green Lantern left J'Onn to pull out his own fire extinguisher... or does this mean the Martian's fractal techgear was FTL, and the irate Kyle Rayner had to save Manhunter's impotent tushy? The change in perspective also makes it clear J'Onn is wearing bicep and thigh pieces of ginormous Liefeldian proportions, with the requisite lack of any clear function.

* Though he missed out on the row of headshots from the title page, which included the Flash, long-haired Superman, Wonder Woman, Green Lantern Kyle Rayner, Hawkman, Robin (Tim Drake,) mullethead Aquaman, Superboy (Kon-El,) and Batman.
Posted by Diabolu Frank at 10:00 PM

Maybe it's a puzzle: the pages are deliberately arranged in random order, and you have to create your own narrative.