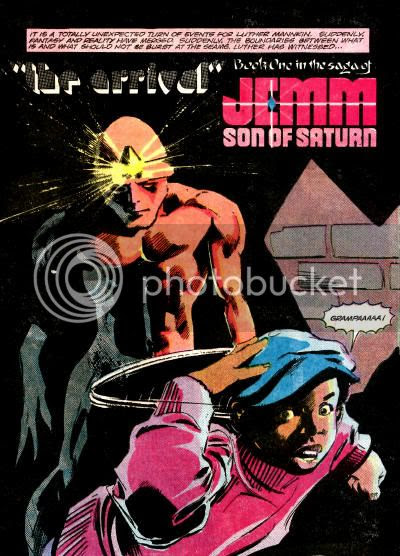 "Remember, my prince, that in the tiniest of seedlings rests the promise of renewed life-- and hope! Nothing is more precious than this! It is the reason why even the most vile men remain not untouched at the vision of a child!"
--from the teachings of Rahani

In a Harlem slum back alley, Luther Mannkin pretended to be a space ranger battling an octo-beast with his plastic laser pistol. The boy dropped his "weapon" and turned tail at the sight of a slender 6'6" half-naked red-skinned alien with a glowing yellow gem on his beetle-brow. "GRAMPAAAAA!" Inhumanly long fingers encircled the crying child in flight, then drew him in to face the alien. "Awe! It fills Luther's mind, silencing him. And then, from the weird pulsating jewel embedded in this creature's forehead... comes something bright and hot-- something that cuts through Luther's very soul."

Meanwhile, Luther's older brother Lincoln was assaulted on his way home from work by a knife-wielding mobster named Reginald. "...My boss, Mr. Claudius Tull, he financed your fancy dude education. He provided you with Grade A smack to sell for a profit! And you ain't paid the man back in over three weeks!" Reginald expected to collect by the following night, "...or the next time you fall, you won't never get up no more!"

Lincoln Mannkin wandered the streets, contemplating his troubles, until returning home at half past midnight. He was greeted by his worried grandfather, who hoped it was the missing Luther who was returning. Gramps wanted Lincoln to help find his little brother, but Lincoln swatted the blind old man's hand away. "You ain't never paid no attention to me before. It's always been Luther this an' Luther that... an' don't notice me never!" Gramps did care, but Lincoln was more interested in phoning his buddy Vin. "You ain't gonna call that scum, are ya? You ain't gonna bring that Vin back into this house!" He sure was, more concerned about saving his skin than his kin.

Lincoln left the apartment to conspire, leaving Gramps to his thoughts. "I've failed, ain't I, Lincoln? Even though I tried and tried. 'Course, bein' blind all my life, you never did look on me as a whole man-- someone you could turn to-- confide in. How could you? I can't provide for you. Lord help me, I can't even see the agitation in your face when you come home worried and scared. So here I sit in the dark-- knowin' only the voices of my two grandsons. One voice is full of hate, the other's been gone too long. Where are you, Luther? Where's my dear sweet youngest in this hellpit of a neighborhood?"

Back in the alley, the heat of the alien's beam subsided, leaving Luther and the being linked through the sharing of "their deepest, innermost emotions." Luther realized how frightened and alone the alien was on this planet far from his own. Luther pressed the alien to come back to his apartment with him, but the alien resisted. It made a gesture to allow itself a moment alone in the darkest recesses of the alley, then emerged wearing a cape...

"New Jersey. Only hours ago, U.S. Government seismographs in three states were awakened by an unusual disturbance here-- the impact of a plummeting craft from the stars!" NASA scientists Phil Wheatly and Deidre Johnson were sent inside to investigate with C.I.A. operative Charles Brigham Dade. Charles was on edge the whole time, fearing something bad might happen to his fiancée there. Deidre looked over a partially decipherable piece of writing she'd found that indicated a flight pattern from Saturn, while Dade studied a holographic portrait of a proud Saturnian family of three. Outside, the craft's entrance was guarded by a pair of troopers, until Willie and Sid were killed by a couple of towering monochromatic Saturnians. Deidre ran to the entrance to check out the scene, and was murdered by an energy blast. Wheatly and Dade were knocked unconscious, a metallic Saturnian noting, "Scan of ship interior reveals only human life-forms. Mission incomplete."

Gramps didn't quite believe Luther's excuse about getting lost, and was curious about the name of the mute foreigner who was supposed to have led the boy home. After taking in a bit of "Me Tarzan, you Jane" between Gramps and Luther, the alien gestured toward himself and said, "JEMM!" Gramps smiled, "Jim! Well, that's not so hard! Glad to have ya, Jim. Luther'll spread you a blanket on the floor. And tomorrow, we'll give you a proper introduction to Luther's brother!"

Dade awoke to find the corpse of "DEEEEEEIIDRE!" With both blood and tears flowing, Dade swore, "You never got to see your aliens, did you, hon? Don't worry. I'll find them. I'll find every last one of them.

The next evening, Luther hid Jemm before his brother returned home, intending on surprising him. Gramps could smell Vin with Lincoln, "just as clear as I can smell a roach." Lincoln lifted his hand to the old man again, and told him to keep his mouth shut until he and Vin could "greet" anyone Claudius Tull planned to send after him. In the bedroom, Luther figured he and "Jim" should lay low until Lincoln cooled off.

Hours later, Reginald showed, and Vin pushed a gun into his face. Regg didn't exactly wither at the sight, instead calling his own back-up, the towering honky called Bouncer. In seconds, the Mannkins' front door was off its hinges, Vin thrown against a wall, and Lincoln about to make a lethal plunge. Luther cried, "Don't you hurt my brother!" Jemm flew into Bouncer. "Regg! The red man! He hurt me, Regg! Bouncer don't like to be... hurt!" Bouncer threw bureau at red man. Lincoln "split while the splittin's good." Bouncer planned "never to be hurt... no more!" Mice and men, as a trapped Jemm was still able to lay Bouncer out with a beam from his gem. Reginald had seen enough, and exited with Luther in tow.

Gramps could hear "Jim's" labored breathing from the exertion of his energy blast; Reginald's heavy footsteps running upstairs; a threat from Bouncer; and Luther's screams. So could Jemm, who tossed the bureau and Bouncer through a wall to the street below, calling "LOOOOO-THEEER!" Jem flew through the hole he'd made up to the roof, where Regg held Luther at knifepoint. Either through a plunge of the blade or off the roof, Reginald would kill Luther if Jemm didn't back off. Gramps caught Regg from behind with his cane. "Ain't no way you're gonna hurt that child!" However, all three parties went over the ledge, Jemm only having the ability to rescue the boy.

"All is suddenly quiet on the street where Luther Mannkin lives. But within Jemm's head pounds the rhythm of worried blood pushing rapidly at his temples. Slowly, a red hand caresses tender brown skin. A feeling of deep helplessness wells within a mighty chest." Luther came out of his haze, only to pound at Jemm's chest, horrified the alien had let Gramps die. "There is sadness then. And hurt. And fear within an alien heart that the one friend he has on this strange world is a friend no more. But at the sight of Jemm, something stirs within little Luther Mannkin. He realizes that true heroes are never perfect. That sometimes, choices must be made. And when it came to choosing between saving Gramps and saving his only friend, Jemm chose his friend. Can Luther really blame him for that?"

Beginning a new chapter in the epic story of the DC universe, brought to you by Greg Potter, Gene Colan and Klaus Janson.
Posted by Diabolu Frank at 9:00 PM

This really and truly reads like a product of it's time. I will have a more in-depth comment later, but I wanted to say that.

Very much so, especially when I reflect on its immediate influences (E.T., The Terminator, etc.)