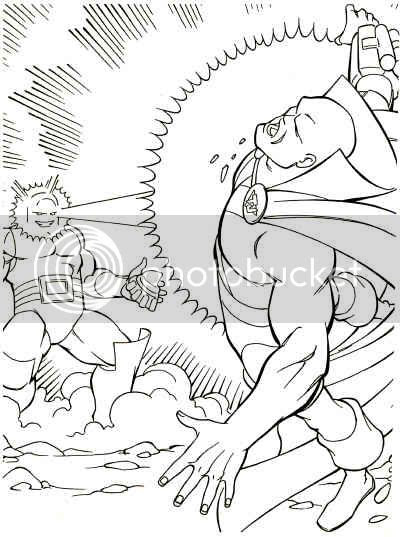 It's been 32 pages since the Manhunter from Mars valiantly attempted to hose down a flame. It's been twenty pages since that didn't pan out. Seven pages passed since J'Onn postured for Oracle with Steel and Green Lantern. Now, finally, the Alien Atlas is going to show what a Martian Miracle Man can do by... getting shot with the Omega Effect by Darkside? Yay? Completely understandable reaction from the Lord of Apokolips though, seeing as he's holding the remains of the largest Oreo ever made in his hand, and J'Onn's always up for a Choco binge!
Posted by Diabolu Frank at 5:15 PM

If you look at Darkseid's head, it looks kind of creepy. All you can see are the eyes and teeth. So apparently the Omega Effect is able to obscure noses and chins, but that's about it. Hmmm... I expected more.