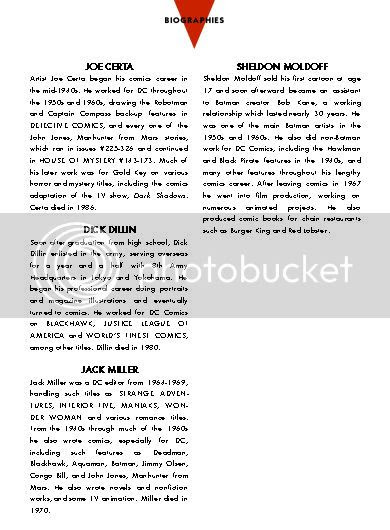 "I know this is overkill and of course you don't have to post it, but here it is anyway:"

Tom wasn't confident the Idol-Head would be interested in another biography page, this one detailed enough to address cover artists. I figure, he put in the work, it relieves a repetition in the links menu for his mock Archive Editions, I could use a day off, and who wouldn't benefit from learning more about the underrated Dick Dillin? You can download the PDF here.

JOE CERTA
Artist Joe Certa began his comics career in the mid-1940s. He worked for DC throughout the 1950s and 1960s, drawing the Robotman and Captain Compass back-up features in DETECTIVE COMICS, and every one of the John Jones, Manhunter from Mars stories, which ran in issues #225-326 and continued in HOUSE OF MYSTERY #143-173. Much of his later work was for Gold Key on various horror and mystery titles, including the comics adaptation of the TV show, Dark Shadows. Certa died in 1986.

DICK DILLIN
Soon after graduation from high school, Dick Dillin enlisted in the army, serving overseas for a year and a half with 8th Army Headquarters in Tokyo and Yokohama. He began his professional career doing portraits and magazine illustrations and eventually turned to comics. He worked for DC Comics on BLACKHAWK, JUSTICE LEAGUE OF AMERICA and WORLD’S FINEST COMICS, among other titles. Dillin died in 1980.

JACK MILLER
Jack Miller was a DC editor from 1964-1969, handling such titles as STRANGE ADVENTURES, INFERIOR FIVE, MANIAKS, WONDER WOMAN and various romance titles. From the 1940s through much of the 1960s he also wrote comics, especially for DC, including such features as Deadman, Blackhawk, Aquaman, Batman, Jimmy Olsen, Congo Bill, and John Jones, Manhunter from Mars. He also wrote novels and nonfiction works, and some TV animation. Miller died in 1970.

SHELDON MOLDOFF
Sheldon Moldoff sold his first cartoon at age 17 and soon afterward became an assistant to Batman creator Bob Kane, a working relationship which lasted nearly 30 years. He was one of the main Batman artists in the 1950s and 1960s. He also did non-Batman work for DC Comics, including the Hawkman and Black Pirate features in the 1940s, and many other features throughout his lengthy comics career. After leaving comics in 1967 he went into film production, working on numerous animated projects. He also produced comic books for chain restaurants such as Burger King and Red Lobster.

Those of you who have bigger DC Archive collections than mine might be able to answer this: Are there any real Archives bios pages that include contributors who pencilled or inked only a single page? (Dillin and Moldoff are the cover artists of House of Mystery #143. Every other page in Vol. 4 would be drawn by Joe Certa.)

My next contribution will be the intro to Vol. 4, which I hope will be less lame/more interesting.

I've liked all your intros so far.