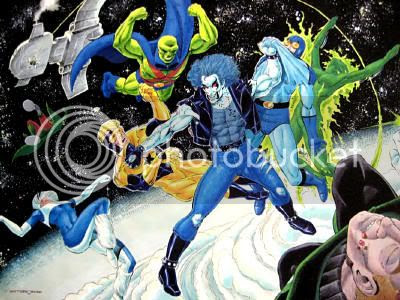 I've gotten a little bit behind again here at the Idol-Head, and my big plans to work behind the scenes this Saturday have been a bust. I needed a subject for a double catch-up post, so I went back to working on "Which Martian Manhunter Villains Do You Have The Most Middling Interest In," which likely won't drop for a few more days. While constructing those link, image & commentary-heavy posts, I'll run web searches on the various rogues, occasionally stumbling upon some real surprises.

For instance, here's a 15x20" full (pencil) color piece by one of my favorite inkers of the '70s & '80s, Bruce Patterson. Featuring a period Lobo battling Justice League International,  one would think the vacuum of space would have taken Blue Beetle, Fire and Ice out before the Main Man (was he even the Main Man yet by that point?) could get to them. One would assume this was meant to take place during the second year space adventure when the JLI fought Lobo, except that mission was to rescue a kidnapped Mr. Miracle, who is present here (despite his best interests.) Booster Gold and Green Lantern Guy Gardner especially look worse for wear, with only our own Martian Manhunter in a position to challenge that fraggin' bastich!

By the way, this marks the 1,000th post I've written for this blog, although only about the 901st to see publication. I really have entirely too many unfinished and/or overwhelming projects, don't I?
Posted by Diabolu Frank at 10:33 PM

For much the same reasons as Doomsday, Lobo, while a tuff sumbitch, should really present a challenge to either Supes or J'onn, and even less of one to the Lanterns. As much as I like a good fist fight, the lack of consistency in intelligent use of powers just irks me.
Still a ton of fun though!

I don't mind Lobo's erratic power levels, as it puts me in mind of another Giffen creation. It strikes me that beyond teleportation, Ambush Bug's major advantage is his awareness that he is, in fact, a comic book character. He knows his only threats lie at 1700 Broadway, and acts accordingly.

Meanwhile, Lobo's main asset is that he's a parody of rugged heroes who improbably punch well out of their weight class (like when Wolverine battled Galactus.) Lobo is such a big waxy blob of self-unawareness, he can go from battling Superman to random alien scumbags, and so long as it leads to violence and a general victory, he can accomplish any stupid thing he puts his mind to.

Sorry, that should have read "shouldn't really present a challenge to Supers or J'onn," but you seemed to get my drift. I get the joke on Lobo, it just grinds my gears (to use the vernacular) that Superman and Martian Manhunter get into slugfests when they have so many other options, not the least of which is aerial ranged assault. Lobo is fun, but MM should just scruff him like he did Guy in JLI and be done with him. (To be fare, Giffen put their first encounter in a closed enviroment. So less of a foul there. Also, that was in the day when Superman could only make it too the moon and J'onn was using a space suit in orbit.)

I don't mind in older comics, but since J'Onn's been established as being about to telepathically knock out whole groups and become immaterial at will, why is he constantly hitting people and crashing through walls? He needs fewer powers or more thought given by his creators.

More thought for sure. Anytime he crashes through a wall, I cringe. I have mixed feelings about telepathy. It is too often treated as magic in comics, with out real thought given to it's ramifications. I can see being sensitive to it, percieving and perhaps even transmitting thoughts, along the lines of super senses. Perceiving thought waves in the same way radio waves and infrared can be seen. But actually manipulating someones mind, just seems too out of the range of possiblity.
Granted, we are talking about a green man who can fly, but, you know what I mean...

I've dug the telepathic shut-down on occasion, but given thought, it's a stupid, derivative power for J'Onn. His telepathy should be limited to communication and maybe the occasional involuntary mind read. Beyond that, you render his physical powers overkill and step on the toes of proper mentalists whose only powers are of the psyche.

You have 99 unfinished posts, Frank? Wow, and I thought I was bad...

"why is he constantly...crashing through walls?" Because it looks cool and every time he does it I get to make a Kool-Aid joke? No, seriously, he should stop doing that.

Regarding telepathy. I wish his telepathy would be more clearly-defined. It goes from memory-zapping to mental barrages that can take down Black Adam to mind control to simple "scanning" thoughts. Well, which is it? And how come he doesn't use it in every battle? I mean, if I could mental barrage Black Adam, I'd be using that tactic every time I went into battle.

Not only that, but telepathy is a huge plot-killer and it just really irks me. If you can mind-blast a criminal into a fetal position, why do you have to resort to hitting him at all? It just makes him too powerful.

There needs to be some kind of rules regarding his mental powers. The cartoon kinda sorta did this--it looked like he needed to touch someone to read their mind (but not always), and often reading minds caused feedback and knocked him out.

When you're dealing with magic, you need rules, otherwise you just set yourself up for overly-logical people like me to get annoyed at you. And it can't be just the "Martian morality" of not wanting to breach someone's mind...that's not a concrete enough rule. Requiring physical contact or something like that is a start.

This is a good blog. Keep up all the work. I too love blogging and expressing my opinions. Thanks