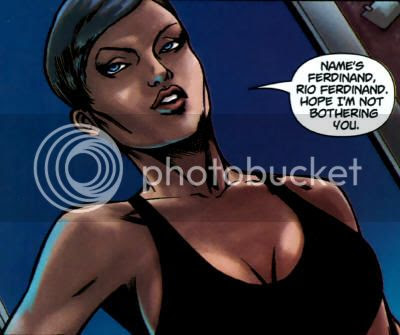 Rio Ferdinand was an agent working under then-current U.S. Homeland Security chief Keane during the "One Year Later" period. She was a casual killer of anyone who might interfere with Keane's plans. This included Alex Ferguson's best friend "Sully" Sullivan and the original head scientist over Keane's Martian experimentation program, whom she "fired" for allowing an escape. Each with done in by a bullet to the brain. Ferdinand activated the brainwashed assassin of Roh'Kar and brought in the agent Giggs to stalk the Martian escapees. Ferdinand led the investigative team following Alex Ferguson's death that connected him to Sara Moore, on whom Rio successfully implanted a tracking device. This led to the uncovering of a Martian safehouse and the death of Jornell.

Rio Ferdinand's total disregard for human life made murder and the threat of same her favorite tool. Putting a gun to an underling's head as motivation to speed up an internet search meant nothing to her. Ferdinand continued to work for Keane until evidence of her murder of Sullivan was leaked by persons unknown to the Federal Bureau of Investigations. While Giggs was initially implicated after going rogue, it seems likely that this was the result of Keane's paranoia. Ferdinand was arrested and questioned, but eventually released on her own recognizance. This afforded her the opportunity to confront Keane, although she was seemingly convinced of his innocence in the matter. Regardless, Ferdinand began collecting a trove of evidence she had kept in various storage locations across multiple states, then offered to feed Keane to the feds in order to walk on her own charge. However, one of the F.B.I. agents was on Keane's payroll, and attempted to murder Ferdinand. Rio escaped, and later turned her bundle of incriminating evidence over to the Martian Manhunter to secure her freedom from immediate apprehension. Whether J'Onn J'Onzz honored the deal is unknown, as are Rio Ferdinand's current whereabouts.

Quote:"There's a very powerful rifle aimed at your head right now, Sara. All I have to do is nod and you'll be dead before you hit the sidewalk. So, are you ready to come with me?"

Honestly? This was going to be a basic "Martian Detectionary/Encyclopedia" post, as were several others related to this series. Keane, Giggs and Rio are all non-powered humans who never actually stood up to the Martian Manhunter. I haven't decided on the other two, but Rio got in because of a combination of a) prominence, b) my intention of letting Vulture agents in, even though I'm now debating that, and c) Wiley Dalbert. If I apply the Wiley Dalbert rule of minimum standards for entry, of course Rio gets in. Y'know, this might be a prime subject for discussion in a post of its own...

I'm not saying she doesn't belong. If Mr. Moth can be in the Menagerie, anybody can. I just wanted to heap more scorn upon "The Coneheads Among Us".

Then you'll love the next issue synopsis. I had to bring in audio/visual aids to express my displeasure. Don't we have a world court to prevent that type of travesty from being foisted upon mankind?

Frank, am I correct in that this mini series will NOT be part of the new continuity? If so, Rio Ferdinand will not be missed by me. Nor is a series where there were enough holes in plot and characterization to fly the Death Star through without a tight squeeze.

Will, so little Martian Manhunter continuity has ever stuck that pinpointing any one story would be a precarious proposition. Before the Human Flame came back, there was no indication that any pre-1985 Manhunter story was in the cannon for over twenty years. If Superman and Batman are now officially the first ever DCnU super-heroes, that means every single "period" story is likely out the window. I guess the silver lining is that if 90% of all Martian Manhunter stories never happened, "The Others Among Us" would hopefully count among their number. However, since the book came out under Didio and the trade collection remains in print according to the DC web site, who knows? That might be one of the only things to get in...

I hope that at least some of J'Onn's stories can be kept. Maybe Paul Cornell will have a fairly free hand... as long as J'Onn is not exposed to the public before Kal-El bursted onto the scene.

That's my hope, as well. Cornell's Demon Knights and his comments on Stormwatch makes it clear that metahumsns/post-humans have been in the DCnU for a very long time. My hope is that the distinction is being bright/gaudy/public super-heroes. In this way, the Martian Manhunter gets another elevation by watching over us alone in the '50s and with Stormwatch thereafter.