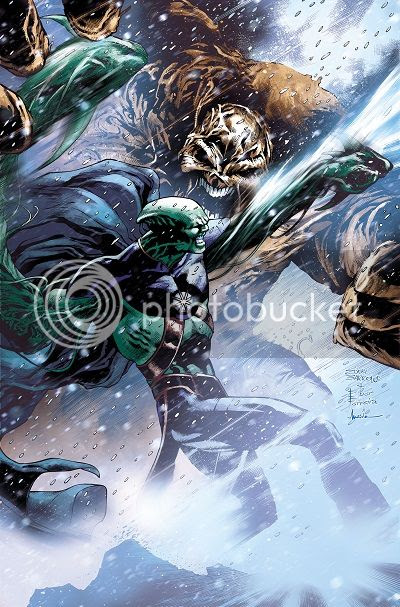 According to Comicvine, the Martian Manhunter has appeared in 2,222 comics to date. Fun odometer read.

These tales from MARTIAN MANHUNTER #0-9 begin as the Manhunter tells Superman how he came to Earth. In his guise as Detective John Jones, he tracks a serial killer and investigates a mystery at Cadmus Laboratories, then saves the Justice League from the threat of Malefic.

We're getting a new book. This is only the second time a full color Martian Manhunter trade paperback has been published for the U.S. market, following 2007's The Others Among Us mini-series collection. Even the second and final volume of Showcase Presents: Martian Manhunter dropped the month after his murder in Final Crisis. It's S.O.P. Hopefully, I like that series better than this one, which began to routinely infuriate me with the issue immediately following those collected in this trade. "Son of Mars" is a cute play on Jemm's presence and production history, and all the best issues not involving Chocos or DC One Million are here. I'm hopeful we'll get "Malefic" and the various Mandrake illustrated bio/origin/pin-up pages from this period, as well.

A FOREVER EVIL tie-in! Survivors Martian Manhunter and Stargirl make a perilous trek across a Super-Villain occupied United States. Their first stop may be the last as they enter Gotham City and Clayface-occupied territory! This issue is also offered as a combo pack edition with a redemption code for a digital download of this issue.

Hey, Batman fans? How you doing? Listen, do you appreciate how much damage the CSA would have to have to have dealt to the Martian Manhunter for Clayface to survive 60 seconds against him? Anyway, Eddie Barrows draws a better Alien Atlas than Dave Finch, so hopefully he'll draw the spin-off series we're totally getting.

With everything to lose, Lex Luthor and his Injustice League raid the stronghold of the Crime Syndicate with consequences so devastating, the DC Universe will never be the same!

It’s here! Straight from the hit video game Scribblenauts Unmasked: A DC Comics Adventure comes an all-new, all-ages adventure featuring Maxwell, Lily and as many DC characters as you can imagine! You don’t want to miss this!

Collecting THE BRAVE AND THE BOLD #28-30, JUSTICE LEAGUE OF AMERICA #1-30 and MYSTERY IN SPACE #75! Together, Aquaman, The Flash, Green Lantern, Martian Manhunter and Wonder Woman stand against such rogues as Starro, Despero, Kanjar Ro, and Felix Faust!

During the first year of this blog, I checked out the initial two Showcase Presents collections from the library and did write-ups for 30-odd issues of this series. They were pretty funny synopses in my humble opinion, but they were lost in a drive crash that I've given up all hope of ever recovering. The reason they were never published before that calamity is because I lacked color art for the prospective posts, which I could scan from glossy stock in this Omnibus. On the other hand, I found these seminal stories to be some of the dumbest comics I've ever read, and the thought of spending a c-note on them is troubling. Do I really want this crap on my bookshelf for the rest of my life?

In this latest trade paperback collecting JLA #36-46, the team is up against a new, deadly Injustice Gang led by Lex Luthor. And then, Ra’s al Ghul continues his quest to save Earth from its inhabitants by thinning the ranks of humanity – starting with the Justice League!

Let's see: this volume collects "World War III," featuring one of the most badass Martian Manhunter moments in his publishing history. Then there's "Tower of Babel," one of the all-time greatest Justice League stories. In the middle, a forgettable Atom guest appearance, but an awesome collection all in all.

The blockbuster event of the summer is collected in this new hardcover featuring JUSTICE LEAGUE #22-23, JUSTICE LEAGUE OF AMERICA #6-7, JUSTICE LEAGUE DARK #22-23, CONSTANTINE #5, TRINITY OF SIN: PANDORA #1-3 and TRINITY OF SIN: PHANTOM STRANGER #11. When the three Justice Leagues go to war with one another, whose side will everyone be on? Allies will be born, friends will become enemies, and the DC Universe will never be the same!

Thumbed through my copies, but knowing the gist of it all via the interwebs, can't be bothered to actually read them.

Jay Garrick has opened a school for youth with special talents and abilities, to train a promising new generation of Super Heroes. However, things fall apart as a mysterious foe, determined to take down the new Titans team, attacks the San Francisco Pier—pushing these young heroes to their absolute limits.

It seems like the guys doing digital first comics are the ones writing the DC Universes people really want to read.

Batman versus Superman! Trapped by the Toymaster and Mongul, our heroes turn on each other! Who will save Batman and Superman if they can’t save themselves? This epic issue is presented in a special sideways format!

Having read the Villain's Month Mongul story and seen that there is no connection between Mongul and Martian Manhunter in the New 52, I will take this opportunity to discontinue Mongul coverage on this blog. Good day, sir!
Posted by Diabolu Frank at 8:03 AM

Speaking of comicvine, do you still use it?

Not as much since they stopped willingly offering linked images. Good for quick character reference, but I stopped editing wikis and offering images. Plus, their contributors have stolen anything they wanted that wasn't nailed down from this blog without attribution, including art I commissioned/edited/created.