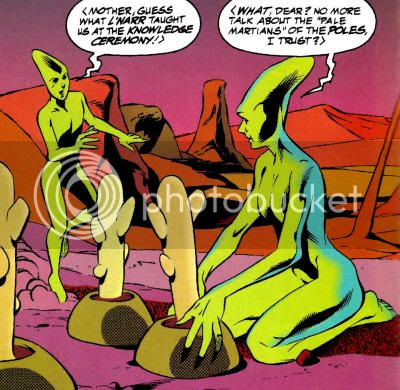 Back in 2009, I posted There Is No New Mars about how I used to calls Mars II "New Mars" because that's what Superman called it in one story, but no offense to the Man of Steel-- he was likely wrong. Anyhow, thanks to Superman, I used "New Mars" in error all over my old Martian Manhunter: The Rock of the JLA site and on message board postings for, like, a decade.

So I'm going over all this Commander Blanx material with a fine tooth comb, including pointing out other sites incorrectly dubbed Blanx “Benn” when I come to a troubling realization. I've been talking about the differences between Pale Martians and White Martians since 1997, even though I hadn't bought the actual comics the Pale Martians appeared in until after I started this blog. The thing is-- those two comics? They don't ever feature the words "Pale Martians." The Pole Dwellers are referred to as "pale-skinned Martians" once or twice, but for sixteen years, I've been calling them "Pale Martians" like a nitwit.

Presumably, I read the line "What, dear? No more talk of the 'Pale Martians' of the Poles, I trust?" in 1996's Justice League: A Midsummer's Nightmare #1 and it caught in my brain with a rare tenacity in the face of the White Martians' introduction a few months later, and my ignorance from not having read any legitimate "Pale Martian" appearances held fast even after I remedied that oversight.

The worst thing? I really want to post "Master Characters: Commander Blanx" before the end of the month, which is about 2/3rds written, and there are some long abandoned Blanx art projects I hoped to get back to but haven't touched. See, I've spent hours and hours on a Commander Blanx video project that looks to demand a few hours more yet, which at least the audio portion is all done on... where I repeatedly reference "Pale Martians." I'm not taking it out, but I'll definitely need to de-capitalize in the transcript, maybe add a disclaimer, and how about all those old posts that need corrections...? ...Suffice to say, expect a week or so in November to get Commandeered, as well...
Posted by Diabolu Frank at 7:00 AM

"Pale Martians" just has a nice ring to it, though.

I can't wait to see this video project...I'm intrigued.

Frank, take your time. By the way, polls are appearing for me again.