The Invading Forces of the Pole Dwellers 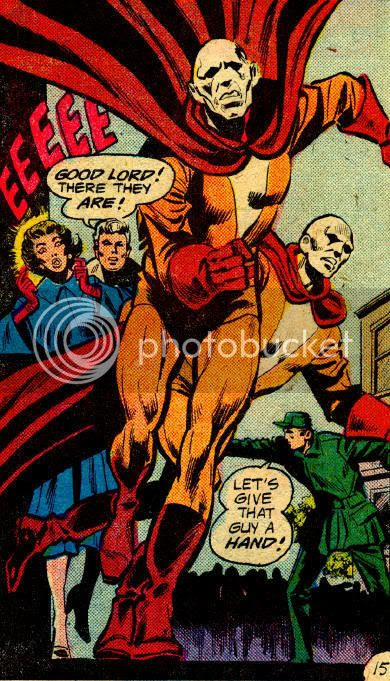 Commander Blanx led an army from the polar region of Mars against the Desert Dwellers in order to capture the Blue Flame of Mars. The Pole Dwellers' primary offensive weapon depicted in their scant comic appearances were green metal vehicles that moved on tank treads while saucer-shaped modules attached by a crane device fired lasers above. Presumably, these vehicles were piloted by Blanx's men, who were shown as uniformly white-skinned with bald heads and of similar build. All of Blanx's men wore a simplified variation of the Commander's own costume, with marked differences. Most were identical to Blanx save for a brown cape and the absence of a headpiece, but others had color variations or bare legs. These forces had no single defining name, referred to as "soldiers" & "intergalactic hoodlums" by the Flash, "lieutenants" & "minions" by J'onn J'onzz, and "allies" by Blanx himself. Each appeared to carry a ray gun as standard issue. They presumably had the same abilities and vulnerabilities as other Silver Age Martians, including a lack of powers on their home planet, and weakness in the presence of extreme heat. They fought and were defeated by the Justice League on two occasions.