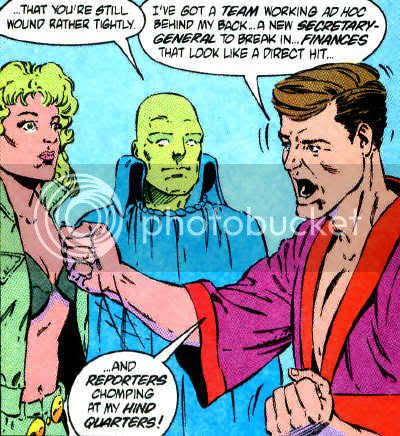 The JLI were wrapping up their intervention in a terrorist plot when the Blue Beetle's Bug got caught between the guy wires of a commuter tramway along the 59th Street Bridge. Martian Manhunter and Fire had to exit the vehicle to manually release the Bug, which then plunged into the river "ungracefully" before recovering.

Max Lord was congratulating the JLI on a job well done, with one slight snag, when a television news anchor reported on the snag, with a slight job done. "That malicious harpy--" Lord was so ticked at Sylvia Duani, he spat out his cigar and dropped his butane lighter... igniting a newspaper... which he was too rattled to notice Martian Manhunter rolling and patting out with his hands.

As it turned out, while Lord was at the Tuck School of Management, he met and briefly married Dartmouth College undergraduate Duani. The pair had a passionate but tempestuous relationship, ending with Duani serving Lord his first set of divorce papers, after less than a month together. Lord also felt he couldn't make his second marriage to Claire Montgomery work, due to its comparative lack of "heat."

Lord was in a tizzy over Duani singling out the JLI's blunder, even though Booster Gold noted, "What's the big deal? Everyone know... when the Justice League falls on its face, it's news!" Fire just figured Max needed some "attention," and set up a double date with her friend Bambi. When neither of their dates panned out, Max talked with Bea about his relationship with Sylvia. "I remember every word... every move... The good times were great... The bad times were hell... We would have ruined each other's careers. Just the thought of her drives me crackers."

Fire decided to film an exclusive interview with Sylvia Duani, and along the way set her up on a blind date that would reunite her with Max. As Bea schemed, J'Onn J'Onzz mostly looked on, and nudged as able. "Max... the fact remains... that you're still wound rather tightly... Earth humans have a continuing need, I have noticed, for recreation. Max, you need to get out more." The Martian Manhunter helped guide Max to his date, at one point assuming the role of a derelict who hit Lord up for change. Manhunter then whistled at the various other Leaguers in hiding and spying around the scene. From inside the restaurant, loud crashing could be heard. Fire linked arms with Martian Manhunter and Blue Beetle (themselves with Booster and Ice) and walked away. "Ahh... the sounds of young love... My friends, our work is done. This could be the resumption of a beautiful friendship."