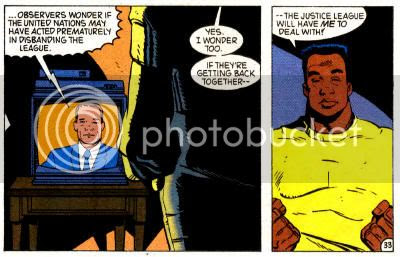 Steel: Also dead, but soon to be replaced by a black man with a big hammer.

Dale Gunn: Last appeared about the time Steel was revealed to not be dead, so he could be killed again.

Gypsy: In limbo, aside from cameos in Justice League Quarterly as part of the Conglomerate.

Vixen: Suicide Squad was getting canceled hereabouts, though Mari had left the team by this point, in favor of the occasional "Animal Man" guest spot.

Elongated Man & Sue Dibney: Wrapped up their four issue mini-series, which led them to join a European diplomatic trip to Florida's Funny Stuff Park. Taken hostage by the Royal Flush Gang, who'd been hired by Maxwell Lord to cause an incident that would inspire the formation of a new Justice League. Things got out of hand when a second benefactor offered the the Gang advanced new weapons. Still, a new League did form, with Ralph's assistance and membership, and throttled the Royals. "I may not be as powerful as Big Blue over there-- or as fast as the kid [Flash]-- but give me a diversion and I can hold my own!" In fact, he even rescued Superman...

Batman: Approached by Max Lord to run a new League, but refused. Instead tried to recruit Superman for the role. "With the Martian Manhunter gone they need your muscle! They need your leadership, Superman. Care to sign up?" No, as he found the JLI to be a ridiculous bunch whose "nonpowered heroes" could never keep up with him. Superman was promptly captured when he brainlessly stormed Funny Stuff Park, was released by Elongated Man, and agreed to join one of two new Justice Leagues. Batman was wisely nowhere near Florida for any of this.

Aquaman: Helped Dr. Light II construct a suboceanic farm. Recruited by Green Lantern Hal Jordan as part of a third wave of heroes to enter Funny Stuff Park. Had Power Girl's back in the fight. Asked to join one of the new Leagues by Hal, his first time serving since the Detroit years. "...after what happened the last time I was a member-- I swore I'd never get involved with a team again! ...I don't know. Booster and Beetle acted so rashly today that they could have gotten civilians killed!" Finally sucked it up and fell in line.

Martian Manhunter: Name-checked by Batman above, as well as Green Lantern Hal Jordan, who said of the Detroit League. "Look, I realize things went badly back then-- but that should hardly be a condemnation for all time! ...with J'Onn and Captain Atom gone [the League is] going to need big-time muscle to do it!"

Bloodwynd: First unnamed cameo appearance, looking like a punch drunk boxer while watching a television in his apartment announce the new League. While the anchorman and the United Nations considered that the team may have previously been premature disbanded, Bloodwynd concurred. "Yes. I wonder too. If they're getting back together-- the Justice League will have me to deal with!"

Weapons Master: Seen only in shadow. Outfitted the Royal Flush Gang to test his toys and the super-heroes. On a mission for a Dominator to steal Guy Gardner's Power Ring. Only kept his blond bimbo Kiki around for the sex, which he indulged in during a slow point in the festivities. Worked out of his personal yacht. 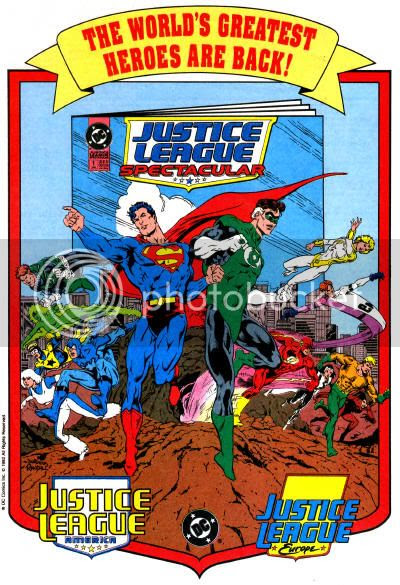 Posted by Diabolu Frank at 6:30 PM

Why you gotta hate on Vibe? He was a hoot! Ridiculous and an embarrassing example of failed ethnic characters of the 80's, but that's part of his charm. :)


This Spectacular special was really the beginning of the end for me and Justice League Europe/International. It just seemed that the stories never recovered after this change.

Yeah, I got away from JLI in the mid-30s, came back for "Breakdowns," and stayed until this special. Afterward, I held it like a soiled diaper, exactly the kind of DC book that made Marvel readers stay far away. I didn't come back until Wonder Woman took over as leader, another awful run. At least Gerard Jones' stuff got interesting toward the very end.