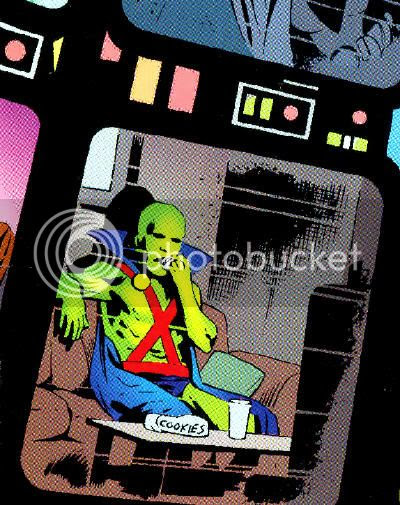 The Martian Manhunter made a cameo on the cover of Chase #1, sitting on a couch watching TV and eating Oreos with milk. Innocent enough, except that he himself was made visible on a monitor bank alongside images of other remotely observed metahumans at the headquarters of the Department of Extranormal Operations. The D.E.O. was a government agency with the mission to gather information on and sometimes exploit the powers of superhumans, with Cameron Chase being amongst their newest operatives at the time.

Chase was late for her first day of work at the New York City office because she chose to drive, and a super-hero battle jammed traffic. She met her immediate superior, Field Personnel Manager Sandy Barrett, who advised her to learn how to use the subway. Barrett immediately shuffled Chase out the door for a plane headed to Daily, Ohio. During this bum's rush, J'Onn J'Onzz had a second cameo, pressing a D.E.O. staffer against a wall while wagging his finger in the man's face. "Tell the Director I have had enough of permits."

Earlier that morning, creepy nerd Jerry Harris had been threatened with a beating from Chad Flint at their junior high cafeteria. Jerry had the hots for Chad's girlfriend Amy Emerson, and the beau was sick of his staring. Jerry had fire-based powers, and often thought about changing his outsider status by becoming a super-hero. Instead, he erupted, injuring many of his classmates.

New elements in standardized testing intended to detect metahumans had already alerted the D.E.O. to Harris' potential, and with this event, Cameron Chase had been dispatched to investigate. Chase and local authorities soon found Harris walking down a back road. Harris again erupted, destroying a police car and igniting an officer. Chase muttered, "That's it then. One less meta in the world." She was prepared to fire on the teen, but instead became disoriented as Jerry fell backwards into water, his flames doused. "I felt this way back in Gotham. Maybe something is wrong."

Barrett convinced Jerry Harris to enter the D.E.O.'s metahuman youth training facility instead of prison, and he was excited by the prospect. "Do they teach you how to be, y'know, a superhero at this place?" In private, Chase objected. "If he attacked all those people with an axe, he'd be in a high-security mental hospital. Instead, we send him to Club Med for superkids."

The bullying boyfriend, Chad Flint, died from his injuries. A lynch mob stormed the local jail, where an officer was intent on releasing Harris to them. "Just you try that super-voodoo, son. Make me shoot in self-defense." Harris lit up, was shot, but melted his way out of bondage. Members of the mob and houses were set ablaze in his wake, as Jerry headed for Amy Emerson's house. Chase guessed as much, and intercepted him. As bullets had proven ineffective, Cameron allowed the enraged Jerry to leap at her. "STILL WANT TO MAKE ME A SUPER-HERO? DO YOU WANT TO KNOW WHAT THIS FEELS LIKE?"

"I have about two seconds to hope that my plan will work. Then something tugs inside. Suddenly, I can feel Jerry's presence. It feels... The power around him hovers like a cloud of bees. It's almost tangible. Then something inside me reaches out... and swats it all away from him. Just like that. He hits the ground, unprotected, and crumples immediately..." Singed and bald, the boy moaned in pain.

"Whatever happened to me here today was not a fluke. Something is different now..."

I never read these myself, but I noticed the "Cookies" vs. Oreos marking on the bag. Wonder if this was after they made them "Chocos".

I want to say "Chocos" debuted during Jeph Loeb's run on Superman, which began a year later. Not 100%, but it feels right.