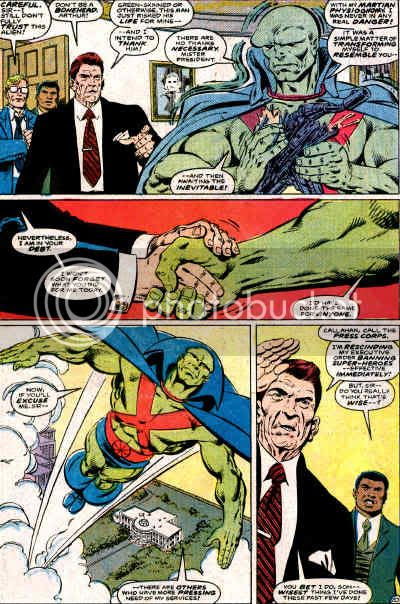 Vixen: No further relevant appearances in the mini-series, but will join the Suicide Squad early into their ongoing spin-off.

Steel & Vibe: Same, but pretty much dead at this point.

Batman: Beat up the Joker for the billionth time. Among the heroes magically materialized at a G. Gordon Godfrey rally in Metropolis by Dr. Fate. Also included were Captain Marvel, Blue Beetle, the Flash, Black Canary, Changeling, Green Lantern Guy Gardner and Superman. Disabled a Warhound. Whupped a gang of thugs. Proud of Robin II's rallying of youth to convince their parents Godfrey was wrong. Co-founded a new incarnation of the Justice League.

Martian Manhunter: "I see Godfrey hasn't changed his tune at all, Doctor Fate!" Not summoned by the heroic mystic, but "Nevertheless, I go where I am needed!" Batman agreed, "Well, you're certainly needed here, Manhunter-- welcome!" Wonder Woman would also crash the party later. Superman asked if the rest of the League was coming. "I'm afraid not... At this moment in time... the Justice League of America no longer exists!" Disappeared during the action...

President Ronald Reagan: "They've come-- as I expected!" Masked gunmen blasted their way into the White House. "This office will not bow to terrorism! You have exactly five seconds to surrender yourselves!" Shot repeatedly in the chest, to little effect. "Now you have two seconds! Time's up! Game's over! What idiots!" Punched out the terrorists and revealed to be the Martian Manhunter as the real Ronny entered the Oval Office. "Green-skinned or otherwise, this man just risked his life for mine-- and I intend to thank him!"

Martian Manhunter: "There are no thanks necessary, Mister President. With my Martian physiognomy, I was never in any real danger! It was a simple matter of transforming myself to resemble you-- and then awaiting the inevitable!" Shook Reagan's hand.

President Ronald Reagan: "Nevertheless, I am in your debt. I won't soon forget what you did for me today."

Martian Manhunter: "I'd have done the same for anyone. Now if you'll excuse me, sir-- there are others who have more pressing need of my services!"

Martian Manhunter: Returned to the fray, standing amongst the heroes to confront Godfrey and control his mob. After Godfrey was rendered temporarily catatonic from donning Dr. Fate's helm, his spell was broken, and J'Onn J'Onzz accepted Fate's call to form a new League. "Indeed I will. Nowhere else is truly home." So too did Batman, Guy Gardner, Black Canary, Captain Marvel, and Blue Beetle. Flash, Changeling and Superman refused, while Wonder Woman returned to hiding wordlessly. "That lady is the very essence of the term hero."

The Creators: Is it just me, or did anyone else think J'Onn wasn't so much modest as a mildly resentful Carter/Mondale supporter who really would have saved the life of anyone like he did Reagan?

"The Creators: Is it just me, or did anyone else think J'Onn wasn't so much modest as a mildly resentful Carter/Mondale supporter who really would have saved the life of anyone like he did Reagan?"


:) Oh yeah, I got the same vibe. I remember seeing the "Regan" kicking terrorist tail panels on Superdickery jokingly presented as if it really was Ronnie. Thought it was pretty funny.

Wow! Now that's an amusing scene representing the rare collision between comics and politics, and a perfect posting for the day following a presidential election. I like the idea of having J'onn J'onzz in the Oval Office!

I've got nothing to add, except that I'm glad you both enjoyed it, and I appreciate you both following the blog & commenting. I'm a loner like J'Onn, but I also like having folks nearby chatting like J'Onn. :)

No problem, Frank! You run a fantastic blog. Thank you for your efforts. I stop in every day to read the latest and I'll be sure to comment whenever I can.

Always happy to comment, just want to say half-way intellegent things. LOL I do have to keep up my para-librarian standards.