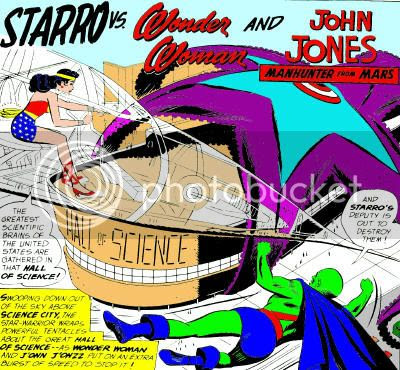 One of DC's many anthologies, The Brave and The Bold, was very good to J'Onn J'Onzz. In that title, J'onzz became a founding member to a new group of heroes called the Justice League of America, successors to the popular Justice Society of America from the World War II era. As with the JSofA, the JLofA's seven member team (also including Superman, Batman, Wonder Woman, Green Lantern, Aquaman, and The Flash) would break into smaller groups to combat a menace. This was the case from their very first appearance, in which each individual member had a roughly equal share of the spotlight.

An oddly blond plainclothes John Jones was saying his goodbye to Captain Harding at the precinct when his "Martian Super-Hearing" picked up that first JLofA sonic distress signal. "I'll spend my "vacation" not as John Jones, detective--but as J'onn J'onzz, Manhunter from Mars!"

After meeting up at the "modernistically outfitted cavern" that was the League's headquarters, The Flash assigned Manhunter and Wonder Woman to protect Science City from a giant purple mind-controlling starfish. In what other medium do you have things like that? This deputy of Starro the Conqueror was pelted by Martian Breath-propelled meteors, before friction caused a fire. Exposed to his greatest weakness, Manhunter used his "Martian Super-Vision" to spot rain clouds in the distance, then literally sucked them overhead until the downpour doused the flames. After that, the Starro couldn't handle the combined might of the Amazing Amazon & Alien Atlas, who wrestled it to exhaustion.

Tracking the Starros back to their progenitor, the League used a tip from teen hipster and subsequent team mascot "Snapper" Carr. While the Flash and Wonder Woman ripped open bags of lime, Martian Manhunter blew the calcium oxide into a lime-storm that incapacitated the would-be alien conqueror. The JLofA made two more appearances in TB&TB before graduating into their own hit series, which didn't hurt the Martian Manhunter's popularity any.

I've actually read this one! I borrowed Adama's Showcase volume one time, so of course this one was first, ha. Anyway, the presence of the Martian Manhunter in these early stories always made me smile because of the somewhat strange way he used his powers: floating around instead of flying per se, and using his Martian Super Breath more than any other power. I guess part of that was to differentiate him a bit from Superman, but still great fun to see him in action in the "big leagues."

(Of course, the anecdote that Fox would have used Green Arrow instead of Martian Manhunter as the seventh member if he knew he could is best left unmentioned!)

I loved these books, we have several collected editions that have these old JLA stories in them. There's really a charm and I love the history to them!

Luke, was that Fox or Julie Schwartz? And yeah, there will be much mocking of these early JLofA stories in the near future. I just can't believe I didn't have a color reprint of this issue anymore, and had to do it myself.

Sarah, I must confess, I kind of hate Fox's work. Like, a whole lot. Much of this post was written in 1999, while the ones to come will be very sarcastic reviews of the Showcase collections I checked out of the library last year. The forgiveness I've extended to some of Jack Miller and Dave Wood's stuff will not be found there.

That may have been Schwartz... I honestly do not remember whether it was Fox or Schwartz now.

I like Fox's solo hero work better than his Justic League stuff. He clearly had a better grasp on some characters than others. I compare this to the early yeas of The Avengers, where it was clear that Stan Lee could handily write each of the heroes as well as the supporting cast without breaking a sweat. Comparing the first volume of Essential Avengers and the first volume of Showcase Justice League of America is like apples and oranges.

The only Fox-scripted series I can immediately recall liking was "Red Wolf" in the 1970s. The Marvel style pathos seemed to suit him, at least in the Western issues. For some reason folks used to praise his sci-fi, but compared to guys like Broome and Hamilton? Yech.

I had a trade paperback of the first Silver Age stories, but found they mostly coasted on the Kubert art and the Hawks rapport. Mavis Trent never registered with me before her brief appearance in "Shadow War." I have a real anti-DC bias with regard to that period, though. My tastes leap from the Golden Age to the '70s there, and even then only the off-brands. I'm more of a Marvel & Tower guy with the '60s stuff.