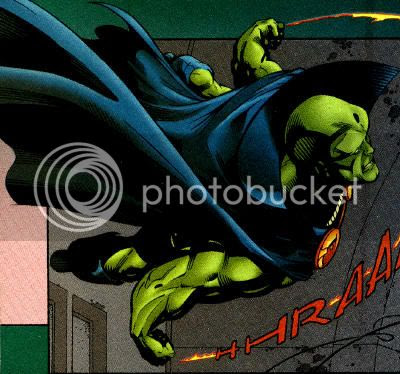 Inside Z'Onn Z'Orr, Superman finally deduced the Hyperclan were Martians, and because his prolonged exposure to Kryptonite hadn't killed him, that it was in fact illusory. "We thought J'Onn was the only one left. How can this be? Martians. I should have seen it before."

As the Man of Steel faced Protex, Primaid commanded Armek to guard the Justice League, whom she felt could still be eliminated in total. "I don't think so." Armek was revealed to actually be the Martian Manhunter in disguise. "Yours is not the only deception, Primaid. And I left the real Armek in the Gobi Desert. Did you really think I wouldn't recognize this city you've unearthed? Z'Onn Z'Orr, the most infamous name in Martian history?" Primaid screamed, "J'Onn J'Onzz! Betrayer! TRAITOR!"

Meanwhile, the real Armek and Züm were trekking to Antarctica:
"This is what happens when you deal with a Green Martian! They're all the same! What makes him think he can just steal a form I designed? ...I'll kill him!"
"We were going to kill him after he'd betrayed the JLA anyway... So he didn't betray his friends... The rest of the plan's still good." 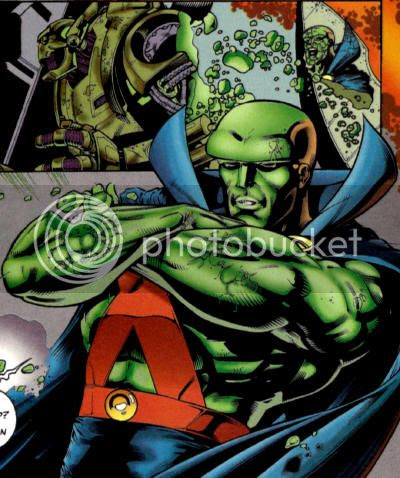 Primaid lunged at the Martian Manhunter. "Now to finish what we started millennia ago." The Alien Atlas backhanded her across the room. Primaid chided, "You hit like what you are: a Green philosopher. I am a true Martian soldier. I can transform my body into a thousand battle configurations: the Flesh Vortex, the Storm of Hammers..." J'Onn J'Onzz reached a switch to release his teammates from captivity. "Of course you can. That was all the Pale Martians ever had to offer our culture: war and hatred and destruction. We reached out to you. You responded with genoc--UNGH!" Primaid melted her humanoid form into a stream of hail that assailed the Martian Marvel, launching him through the roof and out into the Antarctic.

Left flat on his back, Primaid assumed the predatory appearance of a White Martian warrior. "If you had any self-respect, any pride in your heritage, you would have joined us." J'Onn answered, "The Paratexts spoke at length of your tribe. They told us what you did to the Earth and how you were punished." Primaid snorted, "And this planet means so much to you, is that it? You can never be one of them. The best you can ever hope to be is a Green freak! Who cares for a thing like you? Where are your friends now?..." 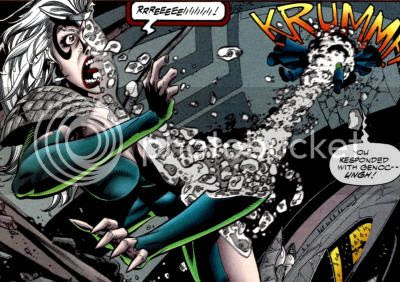 Wonder Woman affirmed, "Where we always are. Right here." Flanked by Green Lantern, Flash, and Aquaman, the Pale Martians would finally be met with full vigor. The three males trounced Armek and Züm, while Wally West asked, "What happened to Primaid?" Gazing up into the outer atmosphere, Martian Manhunter replied, "Wonder Woman happened to Primaid. She went up there."

Superman bested Protex, ending the threat of the Hyperclan, but not the White Martian invaders. "We can't waste time. The invasion fleet has already arrived on Earth and Martian mind control has been overridden by terror." Martian Manhunter explained of a lab in Z'Onn Z'Orr, "These cameras are connected to every television set in the world. The Hyperclan intended to broadcast our executions. Everything's set up. Who wants to do the talking?" 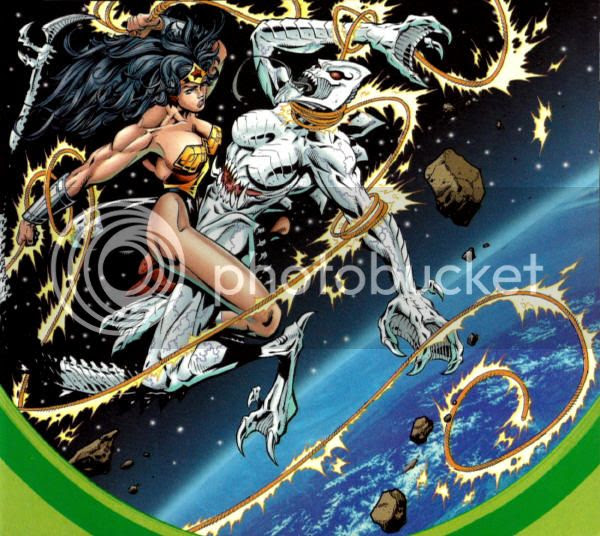 The Man of Tomorrow was the obvious choice. As flying saucers filled the skies and armored aliens set foot on our world, he spoke. "People of Earth! This is Superman. I know it's difficult right now, but try not to panic. You must fight against the invaders. We're on our way but we can't reach everyone in time. It's up to you to defend one another. They're afraid of fire! Use fire against them! Stand firm. Right now, courage is all that can light this darkness!"

Matches... cigarette lighters... these were all it really took to force the Martians' surrender. 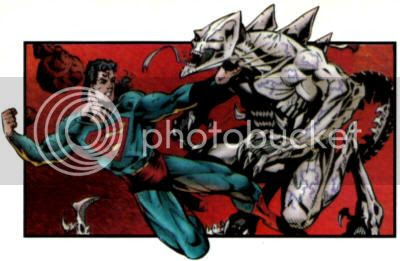 In the Still Zone, an other-dimensional limbo where the invaders had been imprisoned thousands of years past, the JLA inspected the Pale Martian mothership. Superman learned that J'Onn J'Onzz knew who they were as soon as Z'Onn Z'Orr was revealed, but kept the information to himself. "Forgive me, Superman. I allowed personal feelings to endanger you and the others. I miscalculated. They were Martians. This is the last relic of the world I lost... I..."

"Forget it, J'Onn. We won. I'm more concerned about what we do now. This is your call. Who else can judge these people?"

"Martians are shapechangers, Superman. We're familiar with a wide range of mind control techniques. There are... methods. Punishments. You may not approve but I must be the final arbiter. You do not know the culture. You were not there." 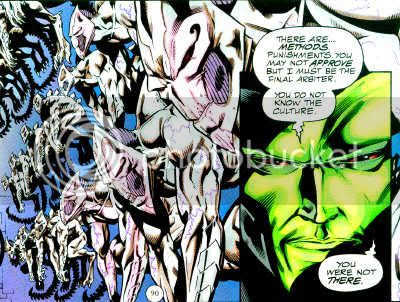 The JLA visited the Sahara Desert, where the Hyperclan's work to create a new Garden of Eden had crumbled to dust, an unsustainable ecology. To safeguard the world, the JLA built a Watchtower on the moon out of parts mined from the Overmaster's ship, fortified with promethium and advanced technology.

Meanwhile, 70 "humans" in countries all around the world felt like they'd "been lobotomized with a corkscrew." They'd had strange dreams since the invasion, and felt in their guts they had "somehow lost something of infinite value." They worked jobs that brought them into regular proximity with fire, and served a sentence for crimes their memory implants would not allow them to remember...

I remember liking this series, but the end was weird for me. As much as I got why it was done, it just seemed weird a little. I mean, I can't see how else they would have solved the problem, but still mind wiping and false memories just seemed kind of invasive..and not J'onn's style. Still I never figured a better way to close the story, so it sat as it did.

I totally agree. I was ticked the fire weakness was back as more than psychosomatic. The mindwipes were both out of character and highly derivative. Might as well have turned the Martians into cows, right? Anyway, at least M. Night Shymalan got some use out of the plot in "Signs."