The Brave and the Bold Team-Up Archives Volume One (2005) 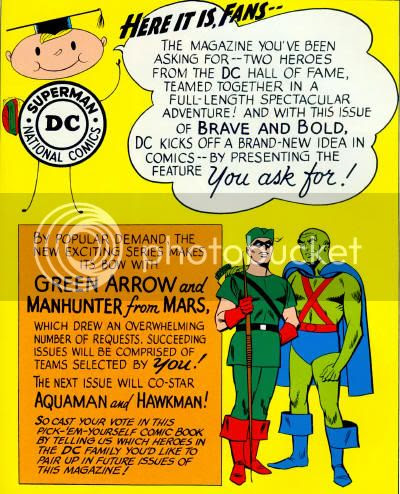 Excerpts from the foreword by Robert Klein and Michael Uslan

“BRAVE & BOLD’s new series was launched with fanfare including a big house advertisement. It even added a short-lived letter column to encourage fans to nominate their own ideas for team-ups.”

“The series started with a very surprising choice for a team-up – Green Arrow and Martian Manhunter, each a long-running backup to major characters. It was the first time either a Green Arrow or a Manhunter from Mars logo appeared atop a comic book. It was also the first time (outside a group JLA shot) Green Arrow was cover-featured since MORE FUN COMICS #103 in 1945, and the first time ever for J’onn J’onzz. One reason these two characters may have been selected for the first B&B team-up is the success of Batman and Superman in WORLD’S FINEST. What DC hero was most like Batman? With his red-clad sidekick, Arrow Car and Arrow Cave, wealthy playboy Oliver (Green Arrow) Queen was certainly at the time being presented as an imitation Batman. And what super-hero was most akin to Superman? But for the fact that his weakness was fire and not Kryptonite, the Manhunter from Mars best qualifies. More likely, this was a way to promote the Martian Manhunter, who would shortly gain his very own cover-featured series beginning in HOUSE OF MYSTERY #143.”

“Issue #56 featured two returning alumni of the B&B team-ups, the Martian Manhunter and the Flash. This was another concerted effort to get exposure for the Manhunter... thus, the importance of pairing him with a first-string DC hero... Bernard Baily handled the artwork. Baily, the legendary artist responsible for the cocreation of the Golden Age Spectre and the Hourman, was a regular on DC’s mystery titles of the 1960’s.”
Posted by Diabolu Frank at 9:00 PM

I love the intro saying "Because you demanded these characters!". More likely because they wanted to promote them, but its charming!