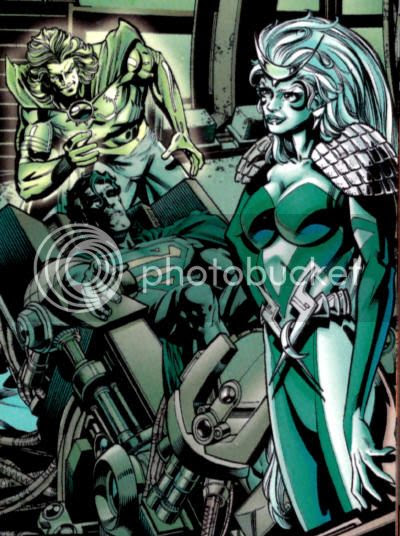 Primaid promised that, with the kryptonite radiation pulses under the Hyperclan's complete control, they could subdue Superman indefinitely without killing him. Protex taunted, "Oh, Superman... all those people you've saved over the years: where are they now? No one is coming. No one cares. You are alone, at the end of the world. Completely alone."

Or not, as the Batman had survived his crash, deduced the Hyperclan's secret, and invaded their base. Flash fought a winning battle against Züm and Zenturion. Green Lantern defeated Armek. 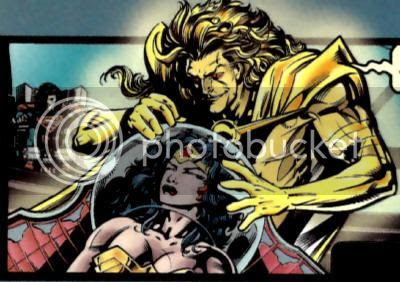 Flash and Green Lantern entered the Gobi Desert watchtower, and the Fastest Man Alive learned to work their technology well enough to discover their orbital mind control transmitters were extra-dimensional. The heroes were then captured by Zenturion and Armek, who transported them to Z'Onn Z'Orr. As the pair were being prepared to join the rest of the JLA in being tortured to death, Armek explained, "When they realized their comrade was a traitor, the fight left them. It was easy." Protex continued, "You hear that, Superman? J'Onn J'Onzz, your faithful 'Martian Manhunter,' has betrayed you." Armek added, "Everything is ready for broadcast. The Martian Manhunter will join us shortly, to denounce his comrades as enemies of Earth." Of Wonder Woman, Protex stated, "It seems almost a shame to destroy this one... Still. The whole world is calling for your deaths, Superman, and we intend to oblige. Then, when you are gone, we will show our true faces to the world. Our ships will come from the skies. And the rivers will run red with the blood of mankind." 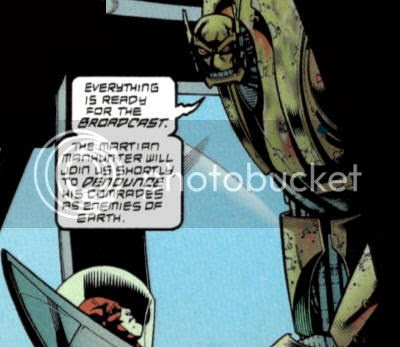 A-Mortal found that five defense drones had been disabled, and when he investigated, was humbled by the Dark Knight. Fluxus, Tronix and Zenturion followed, finding A-Mortal down and Batman waving a box of matches. "Super-strength, flight, invulnerability, shape-changing, mind control: You're Martians, aren't you? And when you brought down my aircraft you didn't dare search the wreckage because of the one thing which robs your people of their powers. Fire." The Hyperclan realized too late that they were standing in a circle of gasoline, and went down in a ring of fire. As they panicked, the Caped Crusader spoke to an unseen party, "Ready when you are."

Protex couldn't believe the trouble one powerless man was causing. He backhanded Superman, and called out orders to his fleet. "This is your commander! Emergency code T'ann T'azz! Target Earth cities! Initiate Operation Hard Rain. Seventy more of us, Superman! All with the power to level mountains! Seventy more! The gods have come to lay waste the world! We win! WE WIN!"