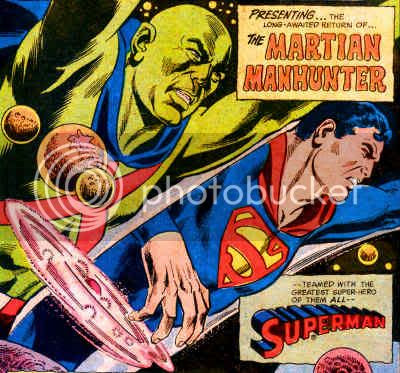 Many of the Martian Manhunter's relationships with fellow super-heroes are curious and complicated... none more so than the one with the Man of Steel.

Going all the way back to the beginning, riding high on a hit television show and widespread acceptance in Post-Code comics, Superman was the big dog at DC in the '50s. Batman, watered down and stripped of his greatest foes, was not. Superman editor Mort Weisinger exerted a good deal of influence at DC, even over Batman editor Jack Schiff. Pressure was leveled to make the Batman books more like Superman's (see: Bat-Mite, Bat-Hound, the Batman Family, etc.) and this extended to the back-up feature "John Jones: Manhunter from Mars." Where once the strip was about a plainclothes detective who was secretly an alien visitor on a crusade against Earthling criminals, it shifted focus to a super-hero who fought aliens with a cop secret identity and supporting cast. Once the Silver Age revivals led to the Justice League of America, where initially both Schiff and Weisinger refused to allow their World's Finest more than occasional appearances, J'onn J'onzz's transition to ersatz Superman was complete.

The first meetings between Martian Manhunter and Superman took place in those early League stories, where all interaction was strictly platonic and colorless. As the popularity of the book prompted the inclusion of more members, and the higher profile of Superman rendering the Alien Atlas redundant, our hero was pushed out. Through League ties though, J'onn J'onzz began appearing in a number of books, including Superman's. There, he was always a caring friend, whether mourning the Kryptonian's seeming demise or impersonating him to safeguard Metropolis. His loyalty was rewarded after the cancellation of Martian Manhunter's solo feature, when occasional appearances in Superman and JLofA titles were the only things keeping the character in the public eye.

Martian Manhunter's m.o. changed massively in 1972's World's Finest Comics #212: punch your friends. It was a whole new ballgame with the words, "Not only are you human, Superman-- but I've made you bleed!" After graciously hosting the Sleuth From Outer Space in his books, this must have been like biting the hand that fed him. J'onzz was rarely seen throughout the 1970s and early 1980s, and often in a misguided adversarial relationship with his fellow heroes, especially Superman. After one image of humiliation for the Man of Steel, Martian Manhunter has spent decades receiving payback. For starters, the other major 1970s pattern: A problem emerged that was too big for J'onn J'onzz, he contacted Superman & friends, then they solved the problem with little input from the Martian.

Redemption was found in the 1980s, when it was decided that Superman's membership in the Justice League would be retroactively negated. Martian Manhunter was again used to fill the void of Superman's absence, as a classical super-heroic founder amongst the punks, clowns, and c-listers that comprised the Justice League until the late '90s. The Martian rarely beat up fellow heroes anymore. J'Onzz and Kal-El interacted irregularly in those years, but J'Onn did return to the role of friendly impersonator and reliable comrade on occasion. However, DC cannot abide any hero to in any way compromise Superman's stature (see: Captain Marvel.) Beginning in the late '80s and going full steam since, the Martian Marvel has been routinely beaten by Superman foes, or the Kryptonian himself, under various circumstances. Also, in nearly every alternate future/Elseworld/etc., especially those spotlighting Superman, Martian Manhunter is humbled or killed outright.

An interesting wrinkle turned up while moving into the new century: although Superman's status as a Justice League founder was eventually restored, writers still hew to the new cannon that Martian Manhunter's heroic activities on Earth began in the 1950s, where Superman got his start at some vague point a decade or so back (a truth for about twenty years now, with the start date just sliding forward with the passage of time.) Though a respected senior status was alluded to in Grant Morrison's "JLA," the contemporaneous Superman writers (including Jeph Loeb, Joe Kelly, and J.M. DeMatteis) recontextualized the rapport to that of J'Onn as more of a personal confidant and repected mentor. This take carried over into the popular "Smallville" television series, and seems increasingly likely to stick. What a long strange trip, from a quasi-imitation to a surrogate to an associate to an abuser, to a hanger-on, to a punching bag, to near equal and finally to elder statesman...
Posted by Diabolu Frank at 6:53 PM

This has always annoyed me, that DC keeps going above and beyond to make sure supes is their top dog. I like superman, but I've always found him one of the less intereseting heroes of the DC universe.

I do admit though, I kind of like the idea of J'onn as mentor, making sure Superman stayed on track, and offering to guide. It fits him I think.

Simpatico, except I was a fan of the Byrne Superman for about six months in 1988. Got over that.

I like Superman, so him being the big dog doesn't bother me. How DC goes about it sometimes does. Supes and DC is like HHH and Vince McMahon -- nothing is too much for DC to make sure that Supes is put over.

That said the idea that the Martian Manhunter has been kicking it since the post-JSoA era and was something of a mentor and confidant to Superman (which was referenced in the recent JLA Classified story by Justin Gray and Rick Leonardi, and is of course the status qup in Smallville, but then again, contradicted in the more high profile New Frontier series and film) is one I can get behind. It puts over J'Onn as being wise and even-tempered, able to think things through just as much as, I dunno, use Martian breath to blow crooks into the stratosphere or something.

Unfortunately the Manhunter will always be like Iron Man -- the measuring stick for how badass some new villian is: "How can we hope to stop something that took out the Martian Manhunter (Iron Man) on it's own?!"

When the heck is that JLA arc getting collected in trade paperback, anyway. It wrapped last year!

I never realized Iron Man was "Tony Sets-Up-Villain" for the Marvel Universe. I'll have to bring that up the next time I see m'boy Dave, to get his thoughts. Anyhow, that's exactly what I'll be posting tonight and some of this week: J'Onny Sets-Up-Villain.

I like Superman too, Luke, its just that it seems like they always have to make sure he's the big gun in EVERYTHING. He;s so overpowered at this point, there's never any real risk.

Actually, I loved him in New Frontier. He came off as the leader, the guy everyone had confidence in, the general making the last charge. But he also was at great risk, when he is dropped by Starro I really felt the "Oh my god, no" moment there because he WAS the country's hope. Cooke did that wonderfuly.