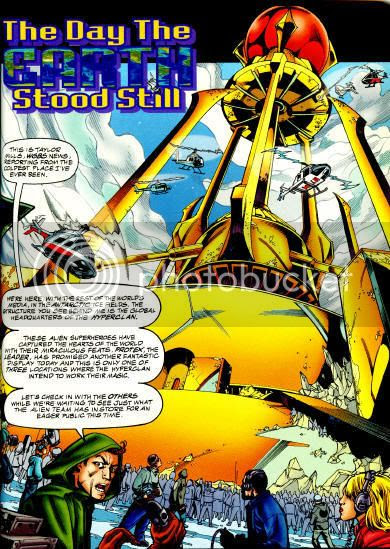 Taylor Mills reported for WGBS News from the Antarctic Ice Fields, which had been revealed to host "the global headquarters of the Hyperclan," the team had previously thawed out. Lisa Haymore was assigned to the U.S. Navy aircraft carrier "Triumphant," in the Pacific Ocean near Midway Island, where the Hyperclan constructed another mammoth base in the blink of an eye. The same was observed by Dave Trimble in Mongolia's Gobi Desert. Back in Antartica, Primaid and A-Mortal were present with Protex, who said, "Call them Watchtowers. We intend to divide our forces into three groups, each of which will be permanently stationed in one of these headquarters. We want to be able to respond to any emergency as quickly as possible. This planet is destroying itself. Your people need help to build a paradise and that help has arrived. The Hyperclan is here to stay. You can print that." 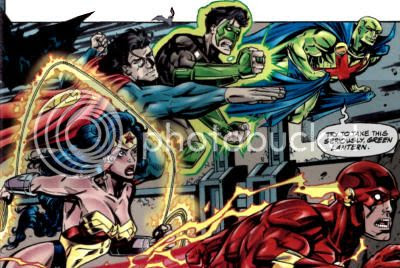 Superman and Green Lantern Kyle Rayner could find no sign of mind control transmitters, but determined the flying saucer over Washington D.C. was just a sophisticated projection. Lantern asked for Batman's plan, but the Dark Knight deferred to Martian Manhunter. "We do what we always do; divide our forces and investigate the threat. Destroy their transmission facilities if need be. I suggest Batman and Superman travel to the Antarctic nerve center-- and perhaps you'd like to take a trip to the Pacific, Wonder Woman. [Kyle Rayner] and Flash can accompany me to the Gobi Desert. Superman complimented, "Good choices, J'Onn." With a smirk, J'Onzz requested as the groups set out, "Try to take this seriously, Green Lantern.

Wonder Woman and a late arriving Aquaman were defeated by Fluxus and Tronix.

Flash and Green Lantern wondered where J'Onn J'Onzz had disappeared to en route, having beaten him to the desert. "So where's J'Onn? He's usually right behind." GL had lost him over the sea, but assumed, "Hey! Looks like the Jolly Green Giant's on his way." This was not as it appeared, as the duo were instead ambushed by Züm, Armek and Zenturion. 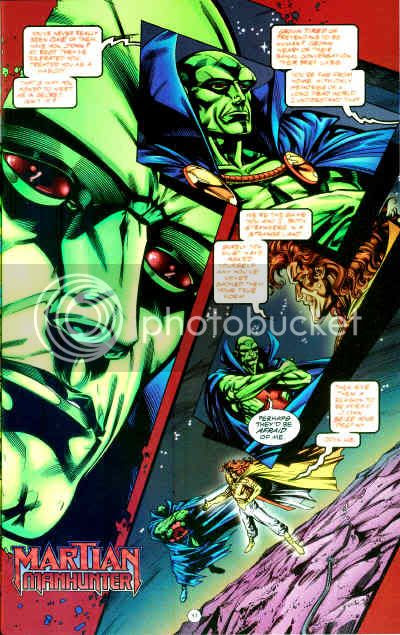 Martian Manhunter's unexplained absence was due to a meeting with Protex in orbit. "You've never really been one of them, have you, J'Onn? At best they've tolerated you, treated you as a mascot. That's why you asked to meet me in secret, isn't it? Grown tired of pretending to be human? Grown weary of their banal conversation, their brief lives. You're far from home, with only memories of a long dead world. I understand that. We're the same, you and I. Both strangers in a strange land. Surely you must have asked yourself why you've never showed them your true form."

"Perhaps they'd be afraid of me."

"Then give them a reason to be afraid, J'Onn. Seize your destiny. Join us." 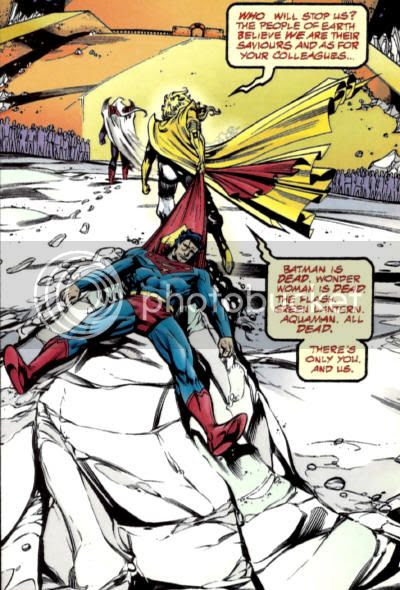 Superman spoke about Martian Manhunter with Batman as they flew south. “J’Onn’s very astute, don’t you think?”
“He has a fine tactical mind. He’s been with the Justice League since the beginning and he understands group dynamics better than anyone I’ve ever met.”

The World's Finest were attacked by the Hyperclan stationed in the Antarctic. Batman's plane was shot down, and he was left to die in the smoldering wreckage. Protex produced a Kryptonite nugget, and dragged the lame former Man of Steel off to torture him. "Every last detail of this operation was carefully planned. Including this... Batman is dead. Wonder Woman is dead. The Flash. Green Lantern. Aquaman. All dead. There's only you, and us. And a whole world on its knees."

I remember this scene! Something about the brunt nature of what Protex says really made me try and imagine what J'onn must see us like. While I remember thinking "They wouldn't be afraid of him, you dork" I did wonder if humans seemed very very alien to J'onn even after all these years, or worse very very savage. Each writers take on him seem to come to a diffrent conclusion on those questions to one degree or another.

Absolutely. Folks who diminish the character based on things like powers fail to see the subtext he offers. J'Onn's very presence allows for intriguing questions to be asked of the readers. I find their pursuit so much more interesting than how he'd do in a fight against such-and-such...