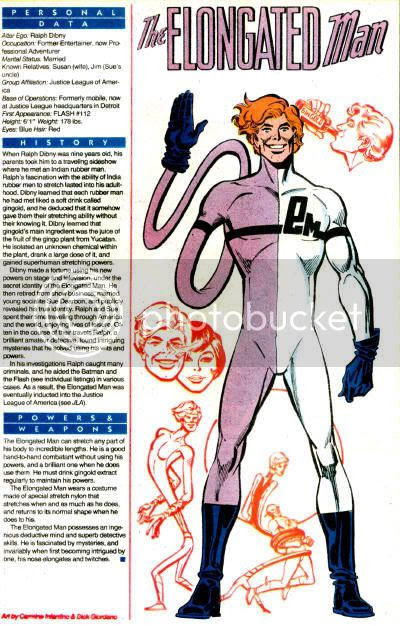 I believe one of the first times I ever saw the Elongated Man, not to mention the whole of the Justice League (as opposed to "Super Friends,") was on George Pérez's magnificent cover to 1983's Justice League of America #217. I noticed this stretchy guy flinging his neck about in the background, and my response was, "oh, another one." Like most people, I never particularly liked super-heroes with that particular power set, and am never pleased when Martian Manhunter shows similar plying inclinations. What respect I have for Mr. Fantastic comes from his superior intellect, where I've had to unlearn decades of Plastic Man hate based on his cartoon show and lousy modern comic appearances. Turns out the Jack Cole originals are some of the best comics of the Golden Age.

Leading the discussion back to Elongated Man, I'm already fighting the urge for another tangent. Ralph Dibney's was an okay guy, and I liked Sue quite a bit. That doesn't change the fact that as far as I'm concerned, the only interesting thing Elongated Man did in 2 1/2 years of Detroit League service was to pown Vibe in his final outing. His time with Justice League Europe was similarly misspent-- the hero most obviously suited to be in a "funny" League that never pulled any laughs. When your non-powered, unadventurous wife outshines you simply by providing decent supporting work to other characters, you should have your hero card revoked. The only time Elongated Man ever worked for me was as a straight detective, but he was rarely shown in that light, and that was Plastic Man's original territory to boot!

Poor Elongated Man. So little love for you. Many heroes gain a soul with their passing, but even in death, Sue Dibney upstaged him...

Art by Carmine Infantino and Dick Giordano
Posted by Diabolu Frank at 7:00 PM

You're darn right he was at his best when he was a detective. I loved the first issue of Identity Crisis where Brad Meltzer showed some of Ralph's detective skills (prior to Sue's death).

I figure we'll get more of "Topper meets Nick & Nora Charles" in the future, so the detective emphasis should win out...

"When your non-powered, unadventurous wife outshines you simply by providing decent supporting work to other characters, you should have your hero card revoked."

I have to agree. As much as I want to like the character at times, the Elongated Man was always a blatantly substandard superhero to me and, as you note, it doesn't help matters that he's the least distinctive or recognizable of a group of comic book heroes with precisely the same wacky superpower.

Really, what could be more damning than a Flash fan, whose title cradled Ralph and continued to befriend him in lean years, yet has no use for Ralph Dibney? I'm really starting to feel bad for the guy, but also really good that his immaterial ghost hands can't tap the Gingold anymore. Let's just recast Cary Grant with Danny Kaye and maybe have the Dibneys start haunting Snapper Carr...

Hear hear! A husband and wife team who happen to be ghosts who also solve mysteries has a hell of a lot more potential than another stretchy guy and his awesome wife.

I always thought there should be a character introduced in the pages of Flash or another "classic" DC title who was big into hero worship, and sucked down Gingold Soda in the hopes of getting Ralph's powers... and because he liked the taste of it.