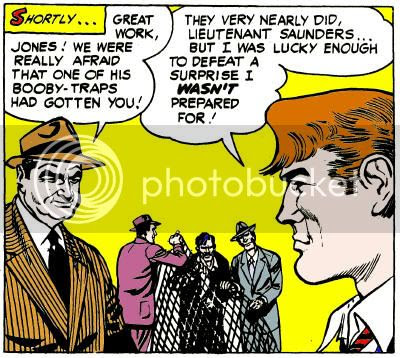 On the outskirts of town, two alert police officers chased "Booby-Trap" Bagley into the abandoned circus area where he had been holed up. "...Lieutenant Saunders ordered us never to pursue him into a possible booby-trapped locale! I'll contact headquarters!"

Detective John Jones was feeling shaky from his proximity to a blaze firefighters were bringing under control. He then made his way to headquarters, where he was met on the steps by Lieutenant Saunders and several other plainclothes officers. "You're just in time, Jones! It's finally happened... We've got 'Booby-Trap' Bagley, cornered! Let's go..."

At the circus grounds, Saunders ordered the brake of a squad car released, so he and his man could push it down a decline to test for traps. "He hides like a mole behind his barriers of gimmick! Let's see what happens when we invade his hideout with an empty patrol car!" Abruptly, the car struck an explosive and was sent flying through the air. "He's up to his old tricks, men! Surround the grounds! Saturate the area with tear gas bombs!"

Twenty minutes later, Bagley was chuckling to himself in hiding, while Saunders observed, "It's no use, men... He must've prepared himself for this, with a gas mask! It's too dangerous for all of us to close in... but one man might have a chance of sneaking through and nabbing him. We'll draw lots for that assignment..." John Jones knew his secret Martian powers would keep him out of jeopardy, so he volunteered to draw first, and used his x-ray vision to insure he pulled the marked slip of paper out of a hat.

Jones wasn't concerned about personal injury as he stalked through the grounds-- only revealing his Martian identity. "Hmm... what's he up to with those balloons? Shades of Saturn! They're filled with a gas that's deadly to Earthmen! I'll make it appear that I held my breath and clutched my nose just in time! Ah-- there goes Bagley now..."

Jones chased "Booby-Trap" onto a working roller coaster, where the Sleuth from Outer Space had to concentrate with "a strange force" to fuse a split rail and maintain his secret identity. It was almost dusk now, and Jones felt compelled to nab the crook before dark. The Detective attempted to de-materialize himself, but found himself slamming into a door. "Great Sunspots! My Martian powers don't work! ...Wait... of course!" Jones realized he had lost his powers for a two hour period due to the passing of the Earth-Mars Comet (not to be confused with the Blazer Comet!) "I-- I'm just another Earthman, seeking out 'Booby-Trap' Bagley! Must watch my step!"

Jones spotted a wall of clocks once intended as games prizes, and noticed one was set at the correct time. He ducked just as it exploded. Next, he saw Bagley climbing up a center ring platform, but also realized he was in the shadow of a falling aerialist's platform to be evaded. Jones followed his prey, literally walking a tightrope after Bagley, who himself reached for a trapeze swing. "Booby-Trap" swung himself at the lawman, who could not keep his balance, and faced certain death from the fall should he miss an open water tank below. As it turned out though, the tank was filled with gasoline, which Bagley ignited!

Jones was horrified, until he realized his previous handicap as an Earthman was now a strength. Neither afraid of nor weakened by the flame, Detective Jones performed a perfect dive past the fire. With both men now on the ground, Bagley thought to himself, "Th-that detective's amazing! I must put a quick end to him!" However, Jones had a trap of his own in mind, using his superior marksmanship to snap the support ropes of the trapeze net above with gunfire. Having netted his catch, the rest of the police were called in to untangle "Booby-Trap" Bagley...

"Great work, Jones! We were really afraid that one of his booby-traps had gotten you!"
"They very nearly did, Lieutenant Saunders... but I was lucky enough to defeat a surprise I wasn't prepared for!"

That night, John Jones returned home to his apartment. "Well-- my Martian powers have returned! Next year, I'll be mighty careful where I operate when that Mars-Earth Comet arrives again!"

"Earth Detective For A Day" was written by Jack Miller and drawn by Joe Certa. Garish “pop art” coloring by Frank Lee Delano.
Posted by Diabolu Frank at 8:30 PM

What a trooper Det. Jones is for showing up to work on a comet day. I would have taken a sick day.

Well, there's Blazer Comet Day and Mars-Earth Comet Day and-- well, John would get more days off than a postman or a banker by the time you tallied them all up. He can't even pretend to be Jewish with a name like John Jones. Maybe he could move to Star City and become Detective Morty Marzman? "Blazer Day? Why, that signifies the firey light that guided my people through the desert during the Exodus. We eat roasted eggs and abstain from all investigative operations until next sundown..."

LOL I love it! That is a great cover story for him!

He'd have almost as many holidays as a librarian!