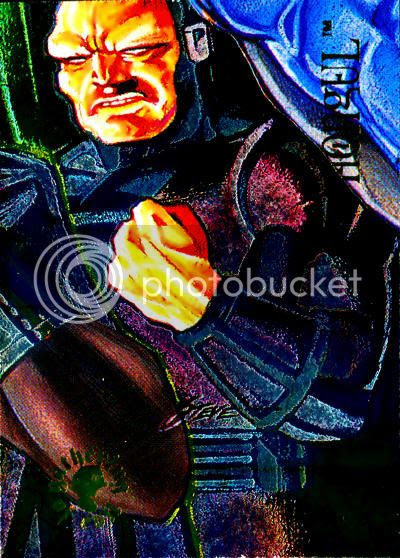 "Gathering of Evil" was a nine card chase subset which came one per every seven packs. The cards were "Spectra" foil etched, like the cover of the 1993 Mayfair Games DC Heroes Role-Playing Game Third Edition Handbook This gave them a weird sort of texture (like feeling a pointilist painting) and made them very difficult to scan.

Collectively, the cards form a group image by painter Steve Stanley. Mongul rests at the bottom right corner, beside Brainiac and below Darkseid. The card back was boringly simple two-toned brown, with the following text:

While our planet stumbled toward its first global conflict, the warlord Mongul swept across dozens of worlds in as many days. Their survivors called him master.

Was Mongul established as being active in the early 20th century and I missed it? Also, the basic card set held the conceit of being narrated by a villain whose reach was established as extending beyond our Earth, so whoops.

I'm not the only blogger relishing New Year's Evil this week. Find more malicious pin-up fun at the following: