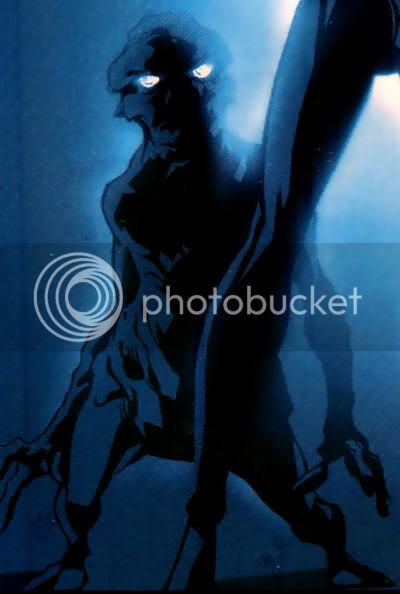 When Marvel Comics' darker, more general audiences friendly Ultimate line hit it big, everyone was wondering how DC Comics would address the possibilities it opened up. Never mind that DC essentially "Ultimatized" their line twenty years earlier after Crisis On Infinite Earths, but Wizard Magazine felt the universe need a lot more unnecessary Bryan Hitch-style padding/piping on their heroes' costumes...

THE ORIGIN: Clark Kent—Superman—awakes with a start. Standing before him is the ghostly image of a shriveled, alien-looking creature. "He is coming," the apparition states before dissipating in the breeze. "He is coming."

The same strange visitation replays itself to John Stewart as he foils a bank robbery. To Bruce Wayne as he rides an elevator in WayneTech, to Barry Allen, and Wonder Woman, all of them telepathically warned by J'onn J'onzz, the last survivor of the planet Mars (shown bottom right). The same great evil that destroyed Mars is coming to Earth, and this Martian hunts men for a super-league capable of defeating it.

THE CHARACTERS: The Dark Knight, the Man of Steel, the Amazon, the Emerald Gladiator and the Fastest Man Alive come together as the JLA when J'onzz pleads to them for help against an evil no one hero can defeat "Mars burned for 200 years after he came," J'onzz says. "Everyone died. Everyone but me."

The supporting cast section mostly applied to the Atom, but it was also acknowledged that J'onzz would act "as the team's intelligence gatherer, telepathic link and resident technology guru." Heaven forbid that he remain a proactive member when he could be E.T. meets Professor X. 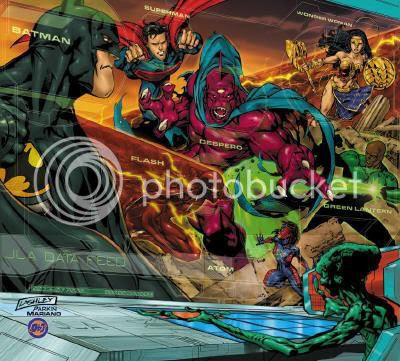 THE FIRST ARC: "After he destroyed Mars, he came to Earth," laments J'ozz to the newly formed League. "But there was nothing to conquer. He killed the dominant species—your dinosaurs—and marked your Earth as a viable future world to subjugate. His.. .no, its name is Despero, the immortal leader of his warlike race. He comes alone, conquers by his own hand and proves his status of God to his people. I have felt his mind. He is coming."

As the team races to learn everything they can about Despero and the Martian/human technology of the JLA's Manhattan HQ, Despero crashes to Earth in a fiery ball of death. Towering over seven feet tall, the alien wreaks havoc through the U.N., brutally killing every delegate inside and donning the UN's flag as a symbol of his power. His next step is to murder the U.S. president, as Despero cuts a path of destruction through all U.S. resistance. Eventually catching up to him, the hastily assembled Justice League face the would-be conqueror as their first mission...and their first failure. Even though they eventually defeat Despero, they may soon have to contend with an entire race of Desperos; having retreated behind Saturn, the rudderless army gives pause to ponder what to do with the one planet that's managed to defeat their god.

THE BIG PICTURE: A few storyarcs in, Superman decides the League members need to know more about each other to work better as a team. As the members reveal their secret IDs and powers, the spotlight falls on a reluctant Batman, setting the stage as the untrusting Dark Knight turns his back on the League...and then systematically defeats them all, just in time for a new villain called The Key to unlock the gates of Hell!

I don't mind the changes to Despero, although it does sort of weaken him as a unique character, unless all the other "Desperos" are more like the Silver Age model. By the way, when exactly did Despero go from a mutant on a race of green-haired humans to an average Kalanorian with an extra telepathic eye? That's been bugging me for years.

Wizard, I'm so glad you're dead.