2010 Batman: The Brave and the Bold Despero Temporary Tattoos 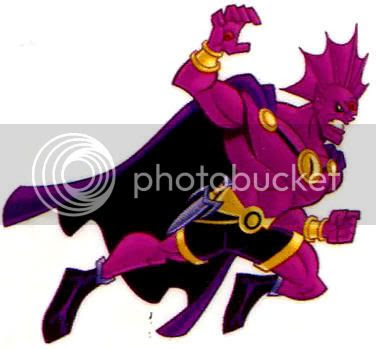 Here's another exhibit of why Martian Manhunter and Despero belong together as superman and archfiend: animated Despero can't have a Silver Age, either. He may not be rocking a finhawk like it's 1985, but from the barbaric baring of flesh to the steroidal bod to the bad attitude, that's a fairly modern Despero for such a retro show. I'm not really complaining though, in part because my non-TV watching self will be speaking from ignorance until I get the DVD hook-up, and partly because I approve of what I've seen of this edition. Aside from working the classic fan fin, B:TBATB-D seems reminiscent of my favorite incarnation, the immediately post-rebirth version from the mid-80s. Also, I love that freakin' badge they came up with for this set. I'd have flipped it for the fan-fin-effect, because I'm cheeky like that, but it's still great! 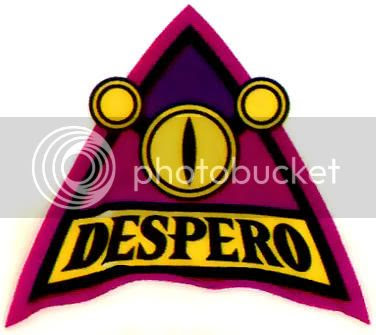 Our pal the Irredeemable Shag of Once Upon a Geek offered these scans and more, so check out his comprehensive first post, and if you're so inclined, partake of character spotlights on some of my other blogs. Also, I've got additional stickers in there, and we all love stickers, right?

Also, with this as the first post, and the J'onn from Midsummer's nightmare it is a heck of a cool face off.

I hadn't caught that, but it's cute, innit?

I kind of wish someone would bring back the Silver Age Desper turtleneck. It gave him a rather refined appearance.