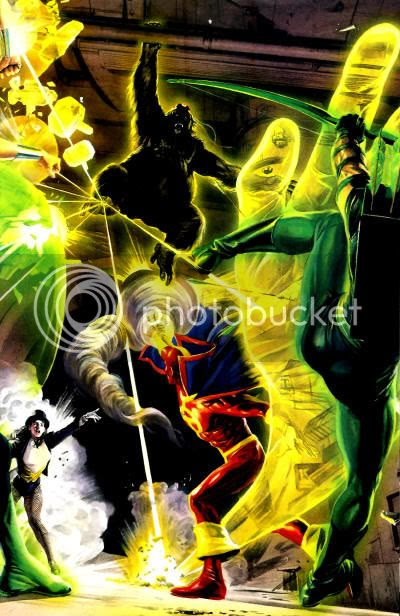 J'Onn J'Onzz stood with his fellow heroes as they worked out their counter-offensive against the Legion of Doom.

The questioning of the captured Captain Cold led Wonder Woman, Red Tornado, Captain Marvel, Green Lantern Hal Jordan, Zatanna and Green Arrow to the secret location from which Gorilla Grodd worked his machinations. "And so they come... Do you think we are not prepared? The Super-Gorilla was hovering upon a hard light construct. and generated a yellow force field. Green Lantern recognized a Weaponers' Ring on Grodd's toe as the type wielded by Sinestro. "Whoever said there was only one? Sinestro? And you believed him?" Grodd launched a stout attack against the collected heroes, but he was betrayed from within, as a gaseous Metamorpho had violated his airway. However, Sinestro burst through the ceiling with a claw construct and absconded with the Super-Gorilla. "I told you, I don't face them. There was to be no physical contact, apart from the Martian." Metamorpho had managed to hold onto Grodd's power ring, though.

As with the rest of the Justice League, the Manhunter from Mars donned a suit of armor meant to protect himself from the mind-controlling parasites which Brainiac had unleashed upon the Earth. The heroic militia then flew to meet their adversaries.

"Chapter Nine" was plotted and painted by Alex Ross. The script was provided by Jim Krueger, and the penciled layouts by Doug Braithwaite.

Continue the story through these character-specific posts: