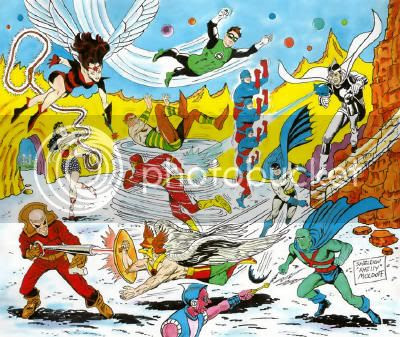 I commissioned this drawing in the fall of 1999 and provided the basic layout for Shelly by scanning the characters from my comic collection and putting them together using photoshop. This piece features seven Justice Leaguers battling five of their most dangerous foes. It was first published on page 72 of Alter Ego issue 40 (Sept 2004) but the credits mistakenly listed someone else as the owner. Michael Eury subsequently published it on page 76 of his Justice League Companion (July 2005), crediting the same incorrect owner.