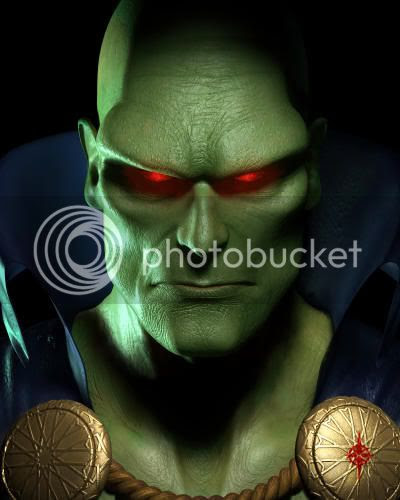 While hunting for references for the fake "Middletown" TV show online, I stumbled upon the blog of a gifted CGI illustrator/animator named Ajay Naran. The artist has a modest sized gallery of finished art, so I was especially surprised to find one of those pieces was this incredibly detailed rendering of a real life Martian Manhunter. I haven't been impressed with the "untooned" fad of transplanting cartoon characters into sickeningly "lifelike" form, but this is an exceptional piece that elevates that particular game. It doesn't hurt that he a) folds the collar how I like and b) comes up with an ornate new MM symbol that shames the rather pathetic attempts made by DC over the past decade. It even manages to evoke the classic (if generic) belt buckle pie, MMs, and chest straps, the JLU star. Very impressive, no?

The Martian Manhunter a big green dude from the DCU and like most aliens in the DCU he has a tragic past in that he's the last of the Martian race. Brought to Earth displaced from space and time Jonn jones as he's otherwise know as, he used his extraordinary abilities as the Martian Manhunter, and was a faithful member of every incarnation of the Justice League. This was a great project to work on, done mostly using Zbrush from a simple base mesh and I did the textures with a mix of photoshop and Zbrush too.

AWEsome with a capital AWE!

wow, look at the texture of his "skin". very impressive work! i couldn't help but notice the likeness to the MM illustration at the top of the right side bar. it's uncanny.

I just now saw Richard Moll in there, or is that just me?

Big-time "whoa." I wonder how long this took to make?

The skin texture and tone is really impressive. Green skin never comes out looking quite right to me (it's usually either unnatural spruce green or sickly pale green), and this is spot on.

I like how only one medallion has a marking on it...asymmetry is a nice touch for an alien.