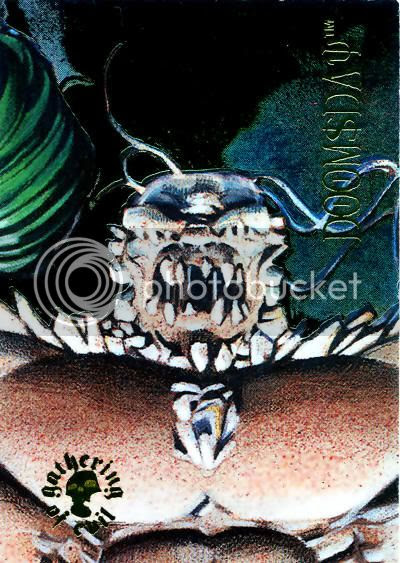 A legend throughout the universe-- the enemy of all that lives-- Doomsday exists only to smash, to destroy, and to kill.

...Hopefully as many Outsiders as possible, and not John Henry Iron, over the currently running "Reign of Doomsday" crossover mini-event. I haven't had to talk about Doomsday all week like Darkseid, but I also have even less to say about him, so I'll let the flavor text from his standard Card #88 continue...

One quarter of a million years ago, this creature was created. Its legend grew as it roamed the universe, obliterating life wherever it went. On Earth, it was called Doomsday and it fought Superman to the point of death. Finally, the Man of Steel dispatched him to the end of time. Do I dare retrieve this Doomsday?

Most of the good Martian Manhunter-related cards from this set ran at this time last year, so this has been one limp "New Years Evil." Sorry for that folks, but I wanted to "play through" with my other blogs and exhaust the material from that set I was interested in discussing. Here's the two cards from the earlier coverage that weren't linked to in other posts. Both are pretty Tony Harris paintings and I think my discussion of why Max Lord isn't in the Vile Menagerie may be worth revisiting.


Finally, here's the last assortment of cards posted to my other blogs. You may want to take special note of (unknown) as it ties the set together...

"...Hopefully as many Outsiders as possible"

Well, his chances are not very good. He won't be able to kill Eradicator, straight up. Geo-Force was just shown going toe-to-toe with Achilles, and has generally been put over as a super badass. I doubt that Dan DiDio would kill off Halo or Katana. Black Lightning, Owlman, and Metamorpho are not in Markovia. Which leaves just Looker... I wonder?

Luke, don't ruin my dreams of a better world without Geo-Force.