2010 The Justice League Of Pint Glasses by Heather Young 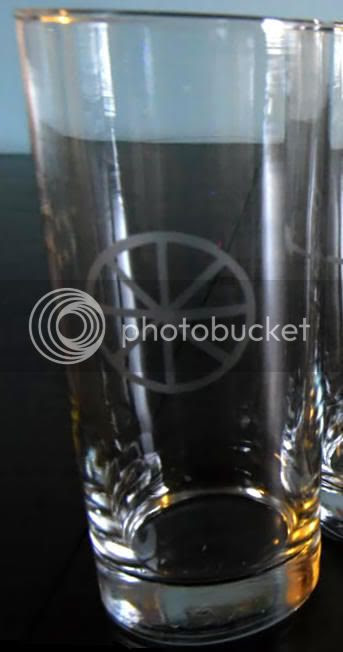 When my wife—then girlfriend—moved in with me two years ago, we had a grand plan to stock our kitchen cupboard with pint glasses etched with the logos of the members of the Justice League of America. (We got the idea after she made a glass for Tom with the Black Hawk logo.) Life intervened, time slipped by, and our grand idea never came to pass. Then, this Christmas morning, I unwrapped an awesome surprise...

Jealous, nerds? My wife rules. Also, I love that Martian Manhunter’s symbol is apparently a halved grapefruit. He gets his powers from free radicals and polyphenols.

The full set includes the ankh of Death of the Endless (who may be a Martian goddess,) a Blackhawk Squadron symbol, a Green Arrow bullseye, a Z for Zatanna, and icons for Superman, Batman, Wonder Woman, the Flash, Green Lantern, Aquaman, Hawkman and the Martian Manhunter. Visit here to see them all, and be sure to check the comments section.
Posted by Diabolu Frank at 12:05 AM

And here this whole time we thought it was a pie....

I thought the Ankh was for Dr Fate?

Good point. It looks a little chunky for Death, but a little skinny for Dr. Fate. I can say for certain that it has nothing to do with Prince, though.

are you sure it's not a Trivial Pursuit glass? No ... well ... that would only be 6 slices of cheese

BZZZ! I'm sorry firestormfan89... You correctly phrased that in the form of a question, but the judges were looking for "What was a joke made in the link's comment section?" They would have also taken "Awesome! Now you can have cookies and milk in your Martian Manhunter glass." It's also great for gauging the degree of angle at which you drink out of it...