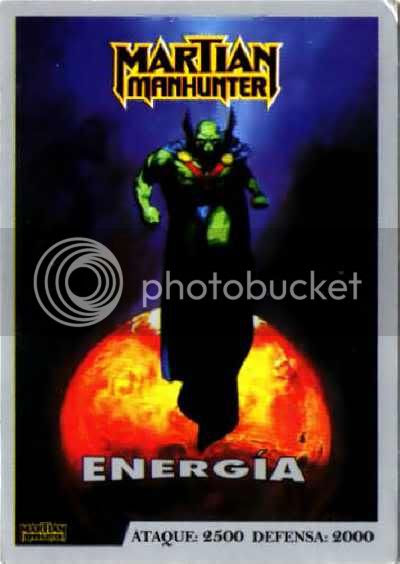 "Energía" should be pretty self explanatory, but just in case, it's "energy" in this card's native Portuguese, as well as Spanish. Sans the accent, it's the same in Russian, and they named a rocket used to lift their space shuttles just that.

"Energía" is also the title of the third gaming card from this series I've found, although I stole this image off eBay, rather than buying it as I did "Poder" and "Lucha". It's a shame too, because I have negative associations with the Tom Mandrake art on mine, but I love this Christopher Moeller painting, and own the poster it was originally created to sell. I really ought to just dig out the two Moeller projects featuring Martian Manhunter I own and cover them here.
Posted by Diabolu Frank at 12:00 AM

Yeah, this image is badass It was expressly for a poster?

So, is J'onn J'onzz a big deal in Brazil? Or at least proportionally bigger than he is here? He seem to get more respect in the stuff I see from there.

Also, speaking of respect (or lack there of) Martian Manhunter is finally a Super Friend.

A.W.E.S.O.M.E. That's the second sweet find for future posting of the day.

The first time I ever saw the Moeller art was for a late '90s/early '00s poster. I don't have it hanging at the moment, but I do remember that it was from a time early enough into the JLA craze that such merchandise was rare. I need to see if I can dig up my friend Dave's scan of my copy from ages ago.

I strongly suspect Brazil was the original home of Martian Manhunter fandom. I see more Ajax goodies come out of that one country than anyplace outside the U.S. I also wonder if that's why John Ostrander did that one (Supermanly insensitive) issue set in Brazil (where they speak Charo Spanglish.)