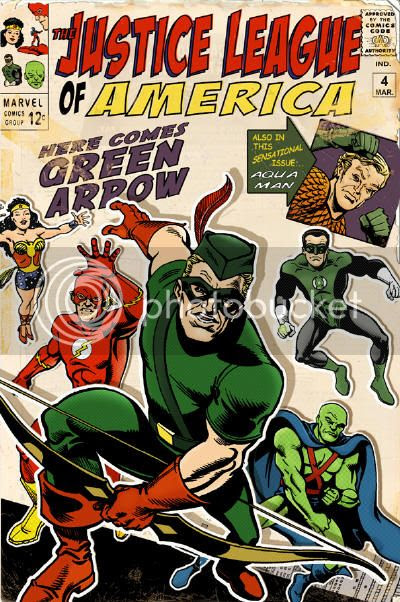 Jack Kirby's 1964 cover to The Avengers #4 reworked with the Justice League of America. This was the issue that brought back Captain America, and given that Green Arrow was published continuously into the Silver Age, I'd have preferred Wonder Woman as his proxy. I guess the costumes are more similar though, and Ollie did join the team in their fourth issue. Also, only Diana could have pulled off Wasp's pose. J'onn J'onzz subs for Thor, Flash walks in Giant Man's shoes, Green Lantern stands in for Iron Man and obviously Aquaman is in Sub-Mariner's corner box. I'm just glad the World's Finest didn't squeeze in. Try to play "Where's Ray Palmer..."

Posted by Diabolu Frank at 3:47 AM

That's all kinds of clever! I also like how MM stands in for his fellow greenie in the corner box!

Yeah, this is pretty boss.