The Villain's Journey: Despero vs. Malefic

Still worn out from the con, I've tried catching up on some blog reading today, This included Every Day Is Like Wednesday, where J. Caleb Mozzocco offered his own deleted scene from Justice League #9. Three commentators erroneously assumed Steve Trevor was being tortured by the Martian Manhunter, when it seems pretty obvious to me that the shadowy figure is in fact Graves, star of the upcoming story arc "The Villain's Journey." To confirm this, and without recalling the new character's name, I googled the title of the arc. As it happens, the internet seems to have actually offered up an antagonist's take on Joseph Campbell's monomyth, a consistent pattern of action followed by heroes in world mythology. An overview of this concept is laid out here, but you can cut to the chase and view Remus Shepherd's canonization of the villain's journey here. I thought it might be interesting to look at this blog's top voted Martian Manhunter villain of 2011, Malefic, and this year's champion Despero, and see whether they fit the mold provided. 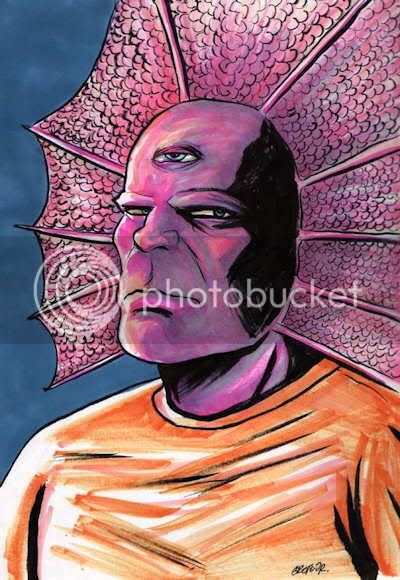 Despero started out as the tyrant ruler of Kalanor in Justice League of America #1, making him its "Master." However, Jasonar and Saranna escaped him to develop an anti-weapon on Earth, constituting "Loss." Despero pursues them, and mind-controls the Justice League of America to keep them from interfering, a "Denial" of terrestrial mores. This was compounded by his offering the Flash a supposed game of chance similar to chess, only to cheat using his telepathy. The League's, and more singularly the Flash's defeat and seeming damnation, along with Jasonar's capture, made it appear that Despero had slain his "Dragon." However, Snapper Carr used the anti-weapon, which "Foiled" Despero's plot. The only stage not reached in the very first story was "Echo," which was covered in Despero's second appearance in Justice League of America #26, when his return to power was explained. 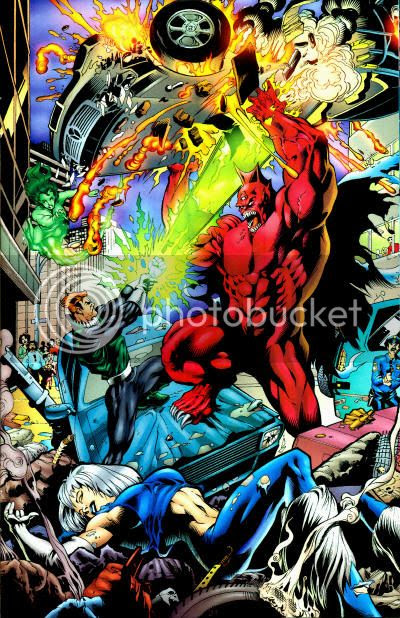 Pulling back over the course of his publishing history, Despero's overall arc continues to fit the mold. He again becomes the "Master" after his rebirth in the Flame of Py'tar, gaining mastery over matter. This in itself is an invocation of a variance, "Final Rituals of Power," in which the oft-defeated original incarnation is discarded like a serpent's skin in favor of the more effective innovation. However, because of his history of "Loss" to the Justice League, he feels compelled to return to Earth to prove his supremacy. In another optional variation, the "First Invasion of Evil" sees Gotham City twisting into a monstrosity of Despero's own design. This leads to the "Denial" of convention by having Despero immediately defeat Batman and Vixen, turning both into distressed figures in need of rescuing and upon whom torment is inflicted. With a manifested "Dragon," Despero appears to slay the JLA. However, his return to greatness is "Foiled" again by the least of the current League, Gypsy and Vibe. However, as he was dispatched by flames, an "Echo" of Py'tar signaled a probable return. This exact cycle was repeated in Despero's first battle with the JLI, as he "remastered" his mohawk form, murdered Steel and Gypsy's family, killed everyone, had his victory revealed as illusory, and leaving behind a fetal form that would mature into an engine of destruction again and again. L-Ron even rode along for a cycle, having initially mastered Despero's corporeal form, only to steadily devolve into an echo of his former glory by being reinstalled into his robot form.

Where Despero appears to be a slave to the villain's journey, Malefic rebukes it by pursuing a contaminated hero's journey. From his earliest days, Ma'alefa'ak heard the "Call" to rise up against his fellow Martians as an instrument of terror. His entire adolescence involves "Refusal of the Call," revisited often in adulthood when J'Onn J'Onzz fruitlessly pleads reason from his sadistic brother. He crosses this "Threshold" by lobotomizing his mother and mind-raping his sister-in-law. Ma'alefa'ak's "Dragon" is the people of Mars broadly, and his brother specifically, who alter his memories and strip him of his psychic abilities. This symbolic death is negated through "Atonement," the recognition that no matter how many chances he's given or liberties taken, he will never be able to ignore his essential nature and fated role. The optional "Magic Flight" came earlier with the discovery of the dark world Apokolips and his later escape with wisdom leading to Ma'alefa'ak's "Boon," the creation of "H'ronmeer's Curse," the plague that will wipe out most life on Mars. "Mastery" comes through genocide, and the assumed death of Ma'alefa'ak's brother in the confrontation that followed.

Having scaled the mountain as a hero in his own mind, Ma'alefa'ak then descends down the villain's path. The converse journey begins when Ma'alefa'ak's assumed mastery over Mars was called into question by a chance sighting of the Martian Manhunter, who constitutes a "Loss" of one in his quest to kill 'em all. The rechristened "Malefic" chooses "Denial" of many cultures in his torture of the Saturnian prince Jemm and numerous murders. Malefic chooses to first frame the "dragon," calling into question Martian Manhunter's history of heroism while simultaneously qualifying some "Final Rituals of Power" necessary before seemingly killing his brother bodily. However, J'Onn J'Onzz yet lived, redeemed himself in his friends' eyes, and ended the threat of Malefic without taking 100% of the responsibility for his execution. However, a psychic "echo" of Malefic remained, triggering a storyline in JLA Classified whose resolution Freddy Krueger would have approved of in anticipation of another sequel.

Whether jumping directly on the villain's path or chronicling a hero's journey leading into degradation, it's no wonder Despero and Malefic are among the most resonant and popular of the Vile Menagerie. The majority are freaks born impotent or freed from the strictures of formula but failing to benefit from that liberty. It may all be fruit of a poisonous tree however, since J'Onn J'Onzz has his own issues with the hero's journey...
Posted by Diabolu Frank at 12:01 AM

As someone who has read some of Joseph Campbell's works and seen the PBS series The Power of Myth, I find this fascinating.

In the end, as Campbell pointed out in The Hero With A Thousand Faces (Hmm, that title ironically invokes a certain native of Ma'aleca'andra), villains are ultimately fools, perceiving themselves as the center of all things.

I am very interested in seeing your take on J'Onn's version of the Hero's Journey and contrast that to some other well known characters. I suspect that if Martians actually existed, their version of the Hero's Journey may be different from ours. (A lot of our common assumptions come from certain facts, such as a shared biology among human beings and many cultural parallels.)

This is one of your best Diabolu. I will be reading this one again for reference.