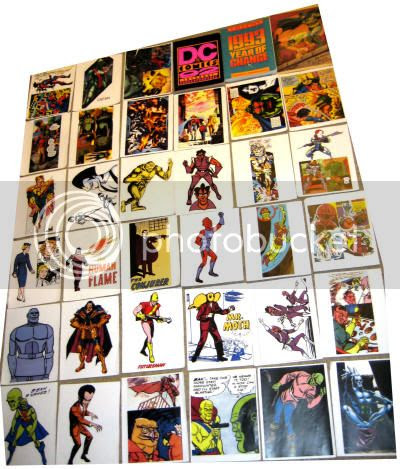 As I've mentioned elsewhere, with the blog's fifth anniversary coming up, and several times more money to spend than in previous years, I planned to go boffo with this year's commissions. Ultimately, I revisited the 2010 reference sheets for four pieces, while 2011's were only useful in three. I wasn't happy with a lot of those images, so I added new reference in abundance for this year.

Attentive readers may have noticed that I've added a fair amount of new biographical entries this year for the Martian Manhunter's friends and foes. Behind the scenes, a lot of that work was coming together with art reference in mind. I had to rush a number of these out at the last minute though, so they're incomplete or cluttered, purely to make sure the artists had a reliable basis for designs and color schemes to work with.

Since none of the printers in the house have color these days, I took a flash drive down to FedEx Express (Detective Comics Comics?) to get copies. The glossy stock and vivid color were a huge improvement over my old material, although the paper seems thinner and less durable. What's really nice is that I didn't hesitate to fill the page with somebody else's ink, making for big bright reproduction. Perhaps best of all, for some reason I got most of my copies for about twenty-nine cents. I went back the next day to finish up some scraps, and with tax that price was doubled.

About half of these pages relate to commissions I picked up this year, but I didn't get all of my reference back with the pieces, so not everyone is represented across these three years worth of images. Also, a number were taken directly out of comics provided to the artists, of which I only lost one. Amateur sleuths should have all they need here to make educated guesses, and I will point out that many of the ponies are already out of the barn across individual blogs/tweets/galleries/etc. For now though, I plan to start posting about one piece a week through September, probably on Wednesday. Do come back for those, won't you?
Posted by Diabolu Frank at 12:00 AM

Did you say your blogspot made money? Compadre I need that. How is it done?

Sorry, but I make a point of NOT making money on this blog, since that would infringe on DC copyright. However, I think there's a "monetize" option in the Blogger dashboard that might make you some coin.

copyright infringement is Not good. I'm really feeling like blogging everyday for a living would be Heaven though. Wouldn't it be cool to talk about superheroes all day and get paid to do it?

There's always journalism. Hit up Comics Alliance/Newsarama/CBR. I'm not sure it's a living, but it could be a nice supplement.

Thanks for the insight. I didn't think those guys let novice (unskilled) writers put pen to paper on their sites. Either way I'm going to peep at it and see.