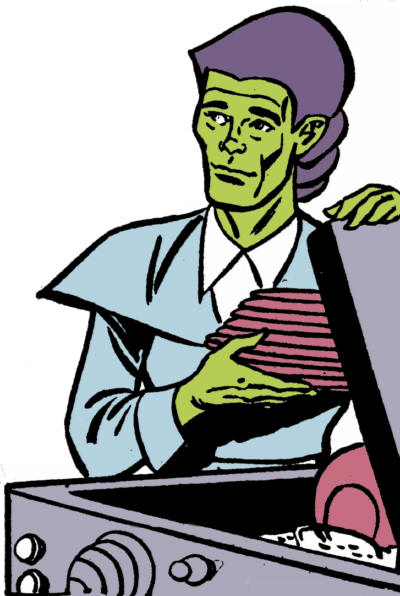 History:
"Mother" and "Dad" J'onzz enjoyed a final meal with their sons before the elder J'onn had to excuse himself for work. J'onn was then accidentally teleported to the planet Earth, leaving his mother to worry for years over his mysterious fate. J'onn was trapped on an alien world, but used his scientific prowess to investigate means to reach his home planet. Thanks to solar explosions, J'onn J'ozz was briefly able to carry a teleconferencing signal to Mars, comforting his parents with the truth about his disappearance and life on Earth.

Some time later, younger son T'omm was also briefly transported to Earth, but returned home for fear of hurting his parents further with the absence of both their sons. More time passed, until famed scientist Dr. Alvin Reeves managed to repair the robot brain that had captured J'onn J'onzz, and used it to send himself to Mars. J'onn discovered the restored device and made the same trip, reuniting with his mother, father, and brother. However, J'onn was forced to collect Dr. Reeves and return to Earth, leading to a tearful farewell. J'onn promised to visit his mother whenever he could, now that he was enabled to span the worlds.

It is not known if J'onn kept his promise, and in the absence of further appearances, it is likely his mother did not survive the destruction of Mars by Commander Blanx.

"Mother" J'onzz was not depicted as having a consistent appearance. In her debut, she was shown as being bald, with a large headpiece, earrings, and a concealing red cloak. However, in a flashback, she was shown to have long amethyst colored hair, and dressed like a latter-day pilgrim. In her final story, she had white hair in a bun, and was wearing a decidedly less austere orange dress, with a short cape and headpiece.

Quote: "J'onn-- our lost son! Where are you signalling from?"

Created by Jack Miller and Joe Certa
Posted by Diabolu Frank at 3:29 AM

I was just lamenting the lack of a comicvine entry for the Ostrander version of his mother. Good stuff!