I've talked a lot about the upcoming Comicpalooza convention in recent months, which has slipped into mere weeks left before the big event. I'm sorry if you guys have had enough, but I'm just so excited to have the opportunity to go with a few bills in my hand to spread around. For two years, I've gone with little money, mentally counting down to zero as I fretted over which characters I could afford from which artist in which format. This year, I feel more like a pool hustler, calling shots in anticipation of sinking them. "Colored full figure Cay'an by Joe Eisma. Bam!" Further, by next year I'll have to buckle down, pay off my remaining debts, and begin planning my further education/business expenses. I may still be able to get a few choice selections, but then again, I may not. 2012 is my one year to go whole hog, so I'm relishing it.

I'm still bummed that a bunch of artists I was hopeful to see aren't returning this year. Not to be nasty, but others are coming back that I could do without, which is why they won't be mentioned by name. One guest I'd never heard of before his recent announcement is Brent Peeples, despite his attending in 2011. He's apparently done a fair amount of material for Zenescope in recent years, but an Image book with Joshua Hale Fialkov called The Last of the Greats seems to be upping his recognition factor. He's got kind of a Barry Kitson vibe that I like. 9×12 inked head is $30, bust $60. 11×17 inked full figures are $75 + $25 for color, + $20 for additional figures and/or backgrounds. He seems to be best at clean, tight, heroic figures. Re's Eda, N'or Cott, Futureman, Gypsy, Commander Blanx, the Conjurer, Triumph, the Prophet, and the Mercurian come to mind, but I wonder how much the whole
Hyperclan would run?

A place where I'm hoping to run buck wild is Artist's Alley. I try to sample new, unfamiliar artists each year, but this area tends to get short shrift. I've been so busy figuring what I'm able to do with the "names," I often approach just a few of these folks late in the game. A lot of these guys might appreciate the exposure even a little bitty pissant blog like mine can provide, and you can get some fantastic work by inspiring the right newcomer at the right time. It doesn't hurt that the spending dollar goes farther as well, but you do have to keep an open mind over the less predictable results. You might get a masterpiece for $25, or a piece of something else for three times that. 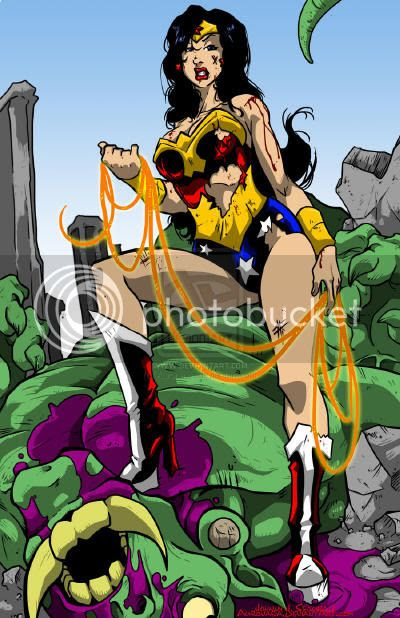 Johnny J. Segura III is one of my favorites of the "unknown" artists. He's got a fun manga-fied style that's incapable of being "dark," no matter how much blood and gore he tries to toss into some of his pieces. I'm leaning toward a really over the top character, like Scorch, Professor Hugo, the Saturnian, or the Human Flame. Austin Rogers reminds me a bit of Paul Msyberry, and might get pegged for similar subjects. Chris Foreman might have been around in previous years. He does these quick sketch cards. A couple of his more NSFW polished pieces bring Kishana Lewis to mind. Otherwise, he'll be a "grab bag" artist.

I think I remember Damon Bowie, but airbrushed looking stuff tends to scare me off. I don't fully understand the process, so of course I hate and fear it. He's got a fair amount of line art though, which calms my anxiety. You know who I'm thinking about? J'emm or Glenn Gammeron. I wish he had a price list up. Ash Gonzales's site is a slow loading pain, and there's no way I can swing an oil painting, but his pencil art is rather nice. I'd like to see a price menu before getting excited, though. Ditto Jon Hughes, whose comic art I'm not that into, and whose digital work is probably out of my range. 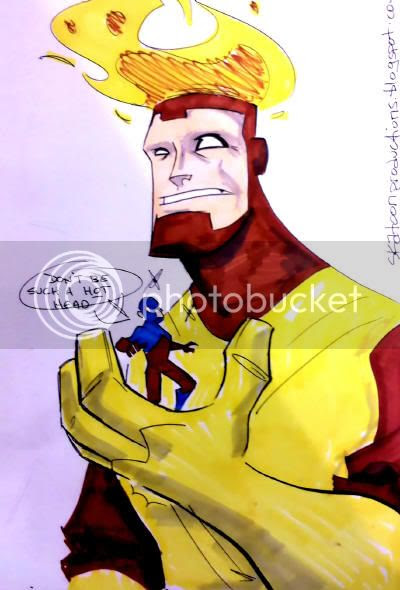 Rob Reilly likes square-jawed types with big eyebrows. Captain Harding? B’enn B’urnzz? The Prophet? Patrolman Mike Hanson? He's done monkeys in his day, so Gorilla Grodd? Jerry Rascoe has a nice, clear commission structure, from $30 for a full figure sketch to $100 inked and colored to $175 for two figures and a background. This is another guy who's good at heroic types, so Triumph comes to mind. Perhaps select members of the Hyperclan? A pairing of N’orr Cott and R’es Eda? Sam Lotfi has a Don Bluth thing going on. Diane Meade, B’enn B’urnzz, Hunter Commander J'en, the Conjurer, the Human Flame, Professor Hugo, Alex Dunster, the Human Squirrel, TOR, Gypsy, Mr. Moth, B'rett or Monty Moran might be nice.

Jamie Kinosian has a soft, sweet style that indicates Comrades of Mars like Sally Winters, Diane Meade, the J'onzz family, or Gypsy. Lane Montoya might work for a sci-fi character like Princess Cha'rissa. Kaleigh “Kalo” Hvizdos might pull off a nice Zook. I kind of have this issue with loathing furry fandom though, so I'll have to work through my bias first. More manga and photo-realism with Amelie “Ami-Chan” Belcher. She's good, but I'm not sure how time-consuming/expensive/reference dependent she is. Martian females? Triumph? Kiriska is another one who tends to go cute and furry, but with a bit more moodiness. The Human Falcon? Chris Beaver also started out with anthropomorphic characters, but thankfully branched out, to the point where I'm not sure what I'd get. He used to do a lot of Aliens/Predator stuff, but then he moved into chiaroscuro, and more recently has got a Mitch Byrd thing going on. Scorch, Kishana Lewis or Strega might be good. Tybalt Bak'sar? The Human Squirrel?

Mark Nasso specializes in dark and weird. How about Asmodel, Cabal, Inflict, Despero, Fernus, Malefic, the Bloodworms of Mars, the Lizard Men, the Pyre, the Scary Monsters or the Swarm? I distinctly recall trying to track down Vo Nguyen at a previous con and failing. His work has an ominous air, like the bastard child of Ming Doyle and Tim Vigil, with some Billy Tucci in there. Cameron Chase, Professor Ivo, Inflict, Princess Cha'rissa, Mr. Bones, Fernus, Jemm, Malefic, Libra or Bette Noir? I like C.E. Zacherl because his work looks absolutely nothing like anyone else I've looked at so far. On the other hand, it's kind of stiff and reference heavy, plus I can't find a price quote. Definitely better suited for darker characters. Bette Noir, B'rett, Doctor Samedi, Professor Ivo, Rott, Vandal Savage, Cabal, Mr. Bones, Fernus, Malefic and the Pyre are possibilities.

Matt Frank likes the monsters, so it's kind of a shame I'm not that into the creatures spawned from out of the Diabolu Idol-Head. There's still some critters to choose from though, like Gorilla Grodd, The Human Falcon, Tybalt Bak'sar, Iwangis and Mr. Moth. I don't get the impression Cody Schibi is the kind of guy you walk up to and say "dude, draw me a [blank.]" I think I have to pick something inherently weird, probably in a Lovecraftian vein, so that I'm at least in the ballpark. Some options might be Professor Ivo, D'Kay, Mr. Moth, Asmodel, Cabal, the Bloodworms of Mars, the Lizard Men, the Pyre, the Scary Monsters or the Swarm.
Posted by Diabolu Frank at 4:09 AM

When faced with a con like that (which Boston was) I get 'analysis paralysis' trying to think of who to get. Add the list of characters you are choosing from and I think I would go mad.

I do like Scorch for Segura if you are looking for input.

I want feedback on everything I post, but I'm especially happy with stuff like this, in part because it's uncommon. My first year doing commissions on the fly, I was like a malfunctioning Stepford wife, burning circles in the carpet of the convention floor trying to figure out who to pay how much for drawing what. Reflecting on that helped me form a proper strategy for year two, which I expect to build upon in year three.

A big part of that is hashing out the final decisions in posts like this. I want to hear people's thoughts to help me reach that point, but I don't actually get that much comment on them. Instead, during the process of writing and reviewing the posts, I'm narrowing my options over the course of the process. Twenty options become four, and within a few days of posting, one.

If you want to drive yourself batty, start thinking about who you'd like to do Anti-Monitor, Black Flame, Buzz, Cat Grant, Dick Malverne, Insect Queen, Satan Girl, Streaky and Superwoman next year...

If you want to drive yourself batty, start thinking about who you'd like to do Anti-Monitor, Black Flame, Buzz, Cat Grant, Dick Malverne, Insect Queen, Satan Girl, Streaky and Superwoman next year...

(Anj drooling in corner like Psycho Pirate at end of COIE)

I couldn't even decide which Satan Girl costume to get, let alone by which artist.

Can't wait to see what you end up picking!