Which members of the Vile Menagerie would you like to see art commissions of in 2012? 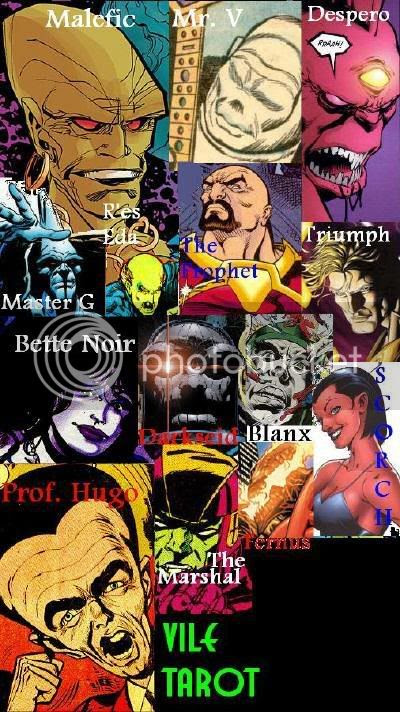 You people are weird.

I received sixteen replies to this unlimited multiple choice poll, which to my thinking means the top vote getter should have something like sixteen votes (excepting perhaps some conscientious objectors.) Ma'alefa'ak (which I suddenly can't spell anymore, thanks to Justice League: Doom's anti-phonetic rendering of "Malefic") got less than half the total votes at seven. I understand that some people don't like Malefic, so maybe they would vote for Commander Blanx, but he only got six of sixteen. Maybe folks felt their vote counted more if they limited their choices, but to my thinking, that just means the majority of voters went out of their way to not vote for characters. I hear it as only 43% of readers want Ma'alefa'ak to get drawn, and only 37% are into new Commander Blanx art. When Despero ties Gorilla Grodd at 31%, what are we all doing here, eh?

One in four respondents were into drawings of Bel Juz, Brimstone, the Devil Men of Pluto, the Human Falcon, the Human Flame, Professor Arnold Hugo, TOR and Vandal Savage. 18% rooted for B’enn B’urnzz, Bette Noir, B'rett, Cay'an, Dr. Light, Dr. Trap, the Headmaster, the Human Squirrel, the Lizard Men, the Marshal, the Mercurian, Mr. Moth, Mr. V, the Osprey, the Saturninan, the Trickster, and Triumph. In other words, 82% hate Martian Manhunter villains with "The," "Doctor" or "Mister" in their names.

Just 12% of you would choose to sully your eyeballs with the likes of Asmodel, the Conjurer, D'Kay D'Razz, Darkseid, Effigy, Fernus, the Hyperclan, the Invaders From the Space Warp, the Martian Criminal, the Martian Mandrills, the Master Gardener, Mr. Bones, Mongul, Prof. Fortune, the Pyre, Scorch, the Swarm, Weapons Master, Thantos, or Vulkor. 94% would choose not to click on posts for Tybalt Bak'sar, Inflict, Kanto, King Zeus, Korge, Libra, Lobo, Malador, Monty Moran, Prof. Ivo, the Prophet, Ryx, S'vor, the Scary Monsters, Strega or the Thythen in your Google Reader. Eighteen characters who shall not be named gained no support whatsoever. I will note that people really, really don't care for the out of print '70s villains. I wish they'd do a DC Presents Martian Manhunter 100-Page Spectacular with the Nasser serial and various Denny O'Neil one-offs, so I could at least know if that's legitimate hatred (completely understandable) or just garden variety ignorance.

There's no rhyme or reason to it. I'm quite fond of Super-Gorilla Grodd, but he's a rather peripheral foe whose association with J'onn J'onzz is largely fueled by minor obscure encounters and retconning them both into a grim n' gritty Challenge of the Super Friends pastiche. Folks have a burning desire for Doctor Light, who I only include on these lists as a formality? From whence does a wellspring of support for Brimstone arise? I got a perfectly fine Dr. Trap commission a couple of years ago, but we'd prefer another over the Master Gardener? Do you guys actually want to see the utterly forgettable Trickster, a blond guy in a cheap suit who hung out with Ben Stoves, or is there some confusion with the flamboyant Flash villain(s)? Weirdos.

Anyway, I ran side polls to help me decide who should draw some of the characters emerging as favorites, and half as many people voted there. Howard Chaykin was a favorite, which makes sense for a preening weasel like Blanx (28%,) but totally leaves me scratching my head on monstrous beasts like Malefic & Despero (42% each) who really aren't his stylistic forte. On Ma'alefa'ak, Paul Maybury, Eric Basaldua, Marcio Takara, and Tyler Kirkham received a vote each. For Despero, Shane Davis got 28% of the votes (A.K.A. "2",) to one each for Marcio Takara and Tyler Kirkham. Davis tied Chaykin on Commander Blanx, with single votes thrown  to Takara, Kirkham, and Thom Zahler. Given the small turn-out and scattered votes, the main impact of these polls was to insure that Andrew Robinson, Joe Eisma and Tommy Phillips won't be drawing any of them.

I've had my say. Defend your choices in the comments...
Posted by Diabolu Frank at 2:20 AM

It's ignorance. I'll probably break down and buy them sooner than later.

Also, I abstained from voting. I like looking at art, but I'm not to picky.

OK I'm gonna come clean. I voted for Despero, thank Justice League Unlimited. I don't know alot about Malefic but after Justice League Doom I want to read about this guy.

I think Malefic is like Dr. Impossible. Brad Meltzer said he was going to tell me about the guy and didn't deliver. So if you know of an issue or plot that will give me Malefic's best showing please let the kid know so I'll have some insight on this bad guy from Mars.

OA1, I'm totally cool with voting for Despero. I just wished folks had placed more votes. When one of your main goals is to spread awareness of a set of characters, and the vast majority of your readership shows a seriously lack of interest in those characters (even the relative "names,") it's a bummer.

To learn more about the evil of Ma'alefa'ak, the Library of Congress suggests moving to Europe, because his main appearances were only ever collected into trade paperback over there. Interesting books like Martian Manhunter (1998 series) #0, 4, and 6-9 may be waiting for you at the local comic book shop, where you can read more about it!

I'm in the process of summarizing Cha'rissa's comicvine wiki page, so don't you whine to me about not caring for obscure characters! :p

Seriously though, your work on the "Vile Menagerie" and the generally overlooked history of the Manhunter from Mars is a wonderful thing. PROPS.

More importantly, you're summarizing out of the Ostrander run, which makes it less necessary for me to sully my mind with those comics. Kudos!

I thought you'd like that; Rereading Rings of Saturn, I was struck by how good it was. I know you hate mind rape and all, but it had lots of action and a nice bittersweet ending...