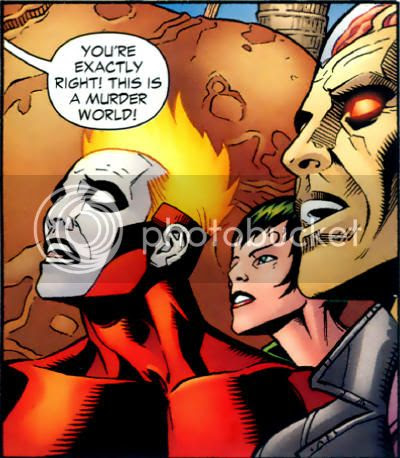 After World War III, Amazons Attack and the murder of a Flash by his Rogues, Checkmate White Queen Amanda Waller authorized a clandestine operation. Super-villains were captured by Task Force X and sent via Boom Tube to an undeveloped world dubbed "Salvation." The villains could keep their weapons and costumes for survival, but everything else would have to be derived from the planet itself. As Waller's lieutenant Rick Flag would inform deportees, they had to take responsibility for themselves after blowing all their chances on Earth. No more trials, pardons or provisions-- the crooks could screw off and form their own society.

While Flag would have been content to dump the lot into the vacuum of space, Checkmate had made sure that Salvation was a peaceful world. However, it was actually a death trap of alien menaces that had been briefly suppressed by unseen forces with their own agenda. The Flash Rogues had fought tooth and nail for a couple of weeks to insure their survival. Finally, Heat Wave, Mirror Master, Abra Kadabra, Weather Wizard and Captain Cold were joined by a second wave.

The Joker had been among those knocked out by the stresses of instant inter-dimensional travel, and the last to wake up. Most everyone else present had been captured after crashing the wedding of Black Canary to Green Arrow, but the Clown Prince of Crime had his scheduled departure expedited for creeping out his guards. He was joined by Kid Karnevil, Tapeworm, Hammer, Killer Frost, Mr. Freeze, Girder, Black Spider, Phobia, Mr. Terrible, Hyena, Clayface, Sonar, Effigy, Tremor, Shrapnel, Sickle, Killer Croc,  Mammoth, Psimon, Shimmer, Rock, and the Cheetah. The Flash Rogues demanded to lead the collective in exchange for their guidance against the dangers of the planet.

"Brave Hellish New World" was by Bill Willingham, Sean Chen and Walden Wong. I wish there had been a line in there about Waller keeping the villains alive out of self interest in the event of future need (rogue heroes, alien invasion, etcetera,) but her involvement with the Suicide Squad made the implication clear. The mini-series actually started out pretty decent in concept and execution, but would devolve rapidly from here.

Posted by Diabolu Frank at 3:25 AM

I totally agree! This series had a lot of potential, but a few good moments aside, leaves me pretty cold.

yep the sheer potential of the book could have been a movie trilogy, but slid into nothingness.

A book like this is supposed to be about spotlighting lesser lights. It's like how the Suicide Squad turned guys like Captain Boomerang into fan favorites by virtue of contrasting them against soldiers and other rogues. When you turn the spotlight over to Lex Luthor and the Joker, the book itself becomes a lesser light in contrast to Superman and Batman comics. All this did was reenforce the obvious hierarchy and kill off some goofier characters modern DC was embarrassed by.