The Vile Menagerie: THE SWARM 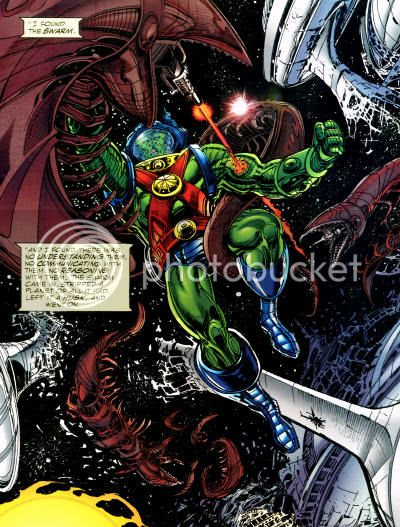 History:
At some point after the 30th century, a still living Martian Manhunter was forced to combat the Clanetary System to preserve the integrity of the solar system. Following their defeat, he learned that their motivation for converting entire worlds into military fortresses was to combat an even greater menace, the Swarm. These alien parasites stripped planets down to a husk in service to their insatiable appetite. They could not be communicated with, there was no reasoning to be had, and their numbers were overwhelming. The Manhunter from Mars traveled 10,000 light years to meet the Swarm head-on, and began a 20,000 year war as the force pushed closer and closer toward the Sol system. Finally, the Swarm reached Earth, and J'Onn J'Onzz led an evolved metahuman army against the Swarm. The creatures' progress was finally halted, and unable to progress but unwilling to retreat, they were exterminated.

Powers & Weapons:
Little has been revealed about the Swarm's power, though it is assumed to be awesome in magnitude. The creatures have been shown to survive in the vacuum of space, can fly at extraordinary speeds unaided, are extremely resilient, and likely quite strong. They can also fire a laser from a cannon in their mouth.

Created by John Ostrander and Tom Mandrake
Posted by Diabolu Frank at 12:00 AM