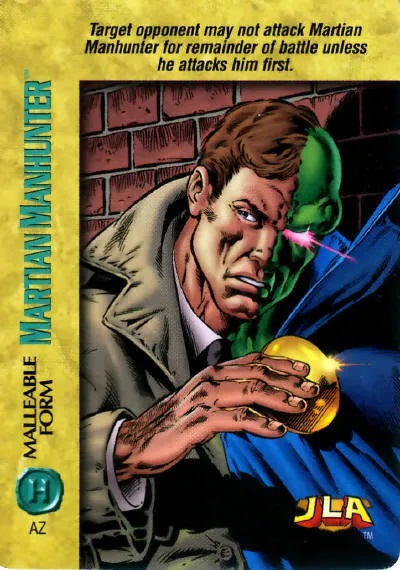 Besides Power Grid Ratings, another reason to choose a Character for an Overpower game team is their Special cards. Only the specific character identified on a Special card can use that card, and only so long as they are active in the game. Another good thing about Special cards is that they are so specific, unless you overload your deck with one single card, the odds favor your not having to discard duplicates. You can hold as many Special cards as you like, so long as they are not the exact same card. Also, you can place a Special open face on the table for later use to free up your hand.

"Malleable Form" is not so great. You have to waste an action to preemptively insure nothing happens with the Martian Manhunter for the rest of the battle. I guess if he's the endangered lynch pin of your team or something, it could be useful.

Though uncredited, the art on all the Martian Manhunter Special cards is clearly by Sal Velluto, making his among the best looking in the set. Back when I had my "Martian Manhunter: The Rock of the JLA" site, I cropped most of these Specials for use in a section devoted to the super powers of the Alien Atlas. Also, secret identities rarely came into play on Overpower cards, so it was a nice surprise for Detective John Jones to make an appearance.
Posted by Diabolu Frank at 7:00 PM

Doesn't seem to be a very useful card, but snazzy art! I would have bought this to frame! LOL

Nuts! It never occurred to me to ask after these Overpower pieces. I own a signed Sal Velluto Black Panther sketch, and a friend of mine bought many of his pages as well. M'boy Dave used to correspond with Bob Almond, Velluto's best inker, who probably did work on this card. Nuts, I say!